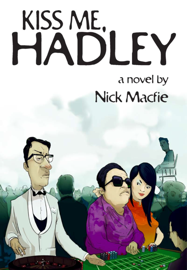 Every now and then I'm sent a review request for a novel that catches my eye, and this was the case with Kiss Me, Hadley by Nick Macfie. Featuring a news agency reporter who goes undercover in an illegal casino in Hong Kong, but with a comic twist, it sounded rather intriguing. I was a bit disappointed when the book came as it has the look and feel of print on demand (though the layout and editing is fine), which never feels quite like a 'real' book, but I managed to ignore this.

The reality of reading Kiss Me, Hadley was entirely curate's egg. Let's do the good bit first. Macfie is great at the setting, really getting us into the sleazy casino world and particularly making Hong Kong come alive. The action scenes, especially those set in a casino, are engaging and pull the reader along effortlessly. These parts of the book are great, and if somehow they could be extracted and interlaced with better dialogue and modified in the ending, this could be a brilliant read.

However. I don't know if it's because the author is trying too hard to be funny, but the dialogue is a disaster. Almost always when two characters converse their conversation meanders all over the place, is full of non sequiturs and simply doesn't make any sense. It doesn't read like a conversation at all. It is just very strange and spoiled the book for me.

As for the rest, leaving aside the totally bizarre involvement of the Conservative Party (don't ask), the ending doesn't tie things up well enough, leaving the very dramatic and puzzling final game at the casino totally unexplained. Macfie sets up lots of things that need explaining and then doesn't bother to do so, which is frustrating.

When it's going well, Macfie reminds me of the best of Leslie Thomas without the sex scenes. That might be what Thomas was best known for, but he was very good at putting a tragicomic main character in dangerous and/or exotic circumstances and making it a cracking good tale. Macfie can do this too - but without serious surgery on that dialogue, the book just doesn't hold up.

You can see more about Kiss Me Hadley at Amazon.co.uk and Amazon.com
Using these links earns us commission at no cost to you