The Late Pig and the Daily Mail 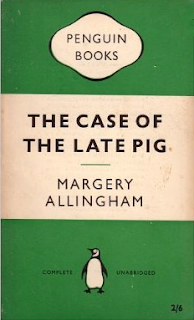 Whatever your politics, it's hard not to feel sympathy for Ed Milliband when the Daily Mail makes such a scathing attack on his late father, and if the Mail intended this to turn people off Labour, I suspect it has backfired in quite a big way.

Part of the problem with any such headline-based spat is that we get immediate knee-jerk reactions to 'the man who hated Britain' and yet actually the picture is much more nuanced, something that has struck me while reading a book by one of my favourite authors, Margery Allingham.

Let's be clear - I do not agree in any way with the late Ralph Milliband's politics. I think Marxism is a dire system that more than throws the baby away with the bathwater. It is ill thought out and destructive. But popular British books from Milliband senior's formative period really do demonstrate that there were things to hate about Britain back then. I've commented before on the casual racism in Dennis Wheatley's books. We may still have some problems with race, but the British attitude back then, which considered even as close and kindred a nation as the Irish to be sub-human, was well deserving of hatred. And in the Allingham book I'm reading at the moment, another aspect we've pretty much forgotten now rears its very ugly head.

The book in question is The Case of the Late Pig. It should be classic Allingham, written in the 1930s, but in fact it is one of her weaker books about Albert Campion, in part because she chooses to write it in the first person with Campion narrating, which means we lose the wonderful contrast between his apparent foolishness and actual cleverness. But another problem for me is a truly hateable concept at the core of the story.

A major player in the book is the local Chief Constable, very local by modern standards, dealing with a tiny police force. Campion treats this man with a huge amount of respect and deference, despite the fact that he is clearly a complete idiot and incompetent. What we forget about Britain in the 1930s, and I'm sure one of the things that Ralph Milliband hated, was that we were expected to defer to such people simply because of their status and class. It didn't matter how awful they were at their job, Allingham makes it clear that this bumbling ineptitude should be treated with affection, because the Chief Constable (an ex-army officer, of course) was the right kind of person. Thankfully this attitude has entirely disappeared, with the exception of some people's ridiculous attitude to the royal family. But it is a powerful reminder of what the country the young refugee Milliband was brought to was like.

So, yes, let Ed defend his dad, and tell us that he loved Britain. But it's not all black and white. There was plenty not to love that has got a whole lot better since. And we shouldn't forget that.