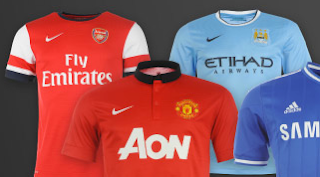 Okay, I haven't had a good rant in a while, so batten down the hatches, me hearties.

I hate seeing men, especially paunchy middle-aged men, in replica football shirts. To me it is both incomprehensible and stomach-churning.

It's different with children. If we can accept seeing our children dressed up as Power Rangers, say (that's what it was in my children's day - substitute current alternative), there's no reason why they shouldn't also dress up as football players. But grown men do not have the excuse of fantasy play.

Why on earth do they shell out as much as £50 for a shiny replica of a match shirt, and then wear it to go shopping at the supermarket, or for a pint down the pub? It looks hideous. This is a uniform, designed for a specific purpose - it simply doesn't work as a casual shirt. And they don't make it any better by either having a real player's name or their own on the back of the shirt.

I also question why they feel the need to wear these things. I admit I have a disadvantage in trying to understand this as I have absolutely no interest in watching sport, and none of the tribal togetherness that would make me want to join in by wearing my team's fancy dress costume. I simply don't get it. But I appreciate that lots of people do - even so, it's hard to see what they feel they are getting out of wearing their wannabe shirts, apart from looking an absolute prat. Surely, I can but hope, they don't think that somehow it gives them some of the player's athleticism and vigour. Watching the shirt slither its way over their pot-bellies really doesn't give this effect.

These shirts are naff, over-priced and pointless. Instead of buying next season's shirt, they should get themselves a decent bit of casual wear and give the remaining 50% of what otherwise would have been profit for the money grubbing companies to charity. Or stick it on the lottery. Or in a savings account. Anything, in fact, rather than wearing that ridiculous tat.