October 29, 2013
Time for another guest post. Robin Walker was born in Worcestershire, and after reading Classics at Cambridge, he emigrated to the then Rhodesia with my family. A few years later, he joined the Ministry of Internal Affairs as a cadet, retiring as a District Commissioner in 1980, by which time Rhodesia had become Zimbabwe. His book, Last Orders at the Changamire Arms, was published last month by Mark Lloyd of Pillar International Publishing. It's a humorous account of his last years in the ministry, and the great people he was privileged to meet and work with. He has written a novel, also laced with humour, on the life of the Greek hero, Herakles, probably better known as Hercules. Apart from that, he is engaged in beating his head against traditional academic walls with his fresh approach to the similes of Homer's Iliad. 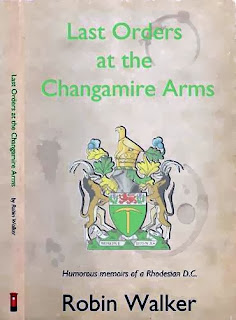 American research has come up with an interesting angle on fishing. It has brought to light an idea I have been hooked on for some while, and that is that women anglers catch more fish than men (nice little ambiguity). Apparently, when a woman plunges her hand into the tin wherein she keeps her bait she passes on the scent of her female pheromones to its contents, so that when she skewers her worm to the hook and casts it into the water, the poor creature so reeks of the stuff that he passes it on to his immediate surroundings. Now, if, while the worm is lighting up a cigarette to while away the time, a fish swims into the vicinity, it finds the scent of the worm so mind-bending it goes into a frenzy and gobbles up everything in sight, hook, line and sinker. Worm and cigarette.

There's nothing fishy about all this. It's true.

Even worms fall under the spell of these phenomenal, female pheromones and will fight each other to the death just for the privilege of first place on the hook. Indeed, I once saw a worm so overcome by the scent of a lady angler that it whipped off its coat, being careful to fold it up before laying it on the grass, dived into the river, and emerged moments later, swimming furiously towards the bank and trailing in its wake one of the biggest wahoos I've ever seen. Or was it a golden orfe?

You can find out more about Robin's book on Amazon.co.uk and Amazon.com

I ought to say in a spirit of scientific balance, that I couldn't find any proper research to support the female pheromone fishing theory (it may be out there, but I haven't seen it), so this story needs to be taken with a fairly hefty pinch of ground bait. BC