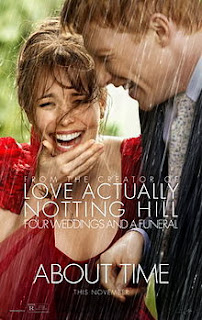 At the weekend we went to see About Time, the latest rom-com from Richard Curtis. Not my typical movie fare, but it did involve time travel in what was, in a very subtle way, a remake of Four Weddings and a Funeral. There will be spoilers, but I will give plenty of warning of their arrival if you haven't seen it.

I'm quite happy to watch this kind of thing as brainless entertainment, but when it enters my territory I expect a little rigour in the time travel, which wasn't entirely present. Even so, I recognize this is fiction, and at that it is fantasy, not science fiction, so I am prepared to give it more leeway than, say, Looper. True science fiction time travel, using technology, started with H. G. Wells' The Time Machine, but About Time belongs to an older tradition, where the trip takes place effectively by magic, whether it's as a dream or, as in Mark Twain's famous time travel book, by being hit on the head.

In About Time, the magic is achieved by going into a cupboard, clenching the fists, and thinking of a time and place. Fair enough, I say - I'm quite happy to watch a fantasy movie, as long as the plot is consistent, and that's where I think Curtis falls down a little. I'll explain why after the spoiler break, but before I do, I ought to say there's a reason I call it a remake of Four Weddings and a Funeral. It's not just that it has a tongue-tied middle class British male main character (who sounds remarkably similar to Hugh Grant in the voice-over narration, but thankfully comes across as less of a twit in his character) and a more together American female main character. There actually are four weddings and a funeral - though the weddings are subtly concealed.

The problem I have with the time travel is that even fantasy should be logically consistent. Curtis sets up the very clever dilemma of 'have another child or be able to visit your late father', but then totally demolishes the reasoning for there being a dilemma. Supposedly the idea is that when the MC went back and fixed his sister's life, his baby changed from a girl to a boy, because it only takes subtle differences in the environment to result in a different sperm getting through. So he goes back and unfixes things for his sister and low and behold his child is back to the way she was. But actually the influence of any surrounding action like the sister business would be far lower than the simple subtle difference in physical conditions at the moment the egg was fertilised. He still wouldn't get the same combo. It couldn't be fixed.

Because of this, his last trip back, with his father to his childhood, would have resulted in the same issue with both his existing children. They would have been changed. It simply doesn't make any sense.

If, on the other hand, we accept it was ok for him to go back to his boyhood, because the episode was so isolated that it wouldn't change anything later, it totally takes away the threat attached to visiting his father after his father's death/birth of a later child, because he could simply go back to one of the many times his father was locked away reading and would have no influence on the future. He could visit his father as often as he liked.

I admit there is an element of breaking a butterfly on the wheel here, worrying about this level of detail, but fantasy should work within the confines of its own rules. Once it starts breaking those rules, it doesn't even work as fantasy any more, it is just a mess.