October 24, 2013
I'm going to be running a series of guest blogs over the next few weeks and the first is from Sue Guiney. According to Sue: 'I'm a writer of fiction, poetry, plays. I'm a teacher of fiction, poetry, plays. Born and raised in New York, I've made my life in London with my husband and two sons. I'm grateful for it all.' I had the pleasure of doing a science/literature event with Sue a couple of years ago and loved her book Tangled Roots.

It seems to be festival season around here. Bankside, London, is in the midst of the Merge Festival, which is the local immersive arts festival. Its aim is to provide a series of events which showcase and draw on the rich heritage and contemporary culture of this area of London's south bank. 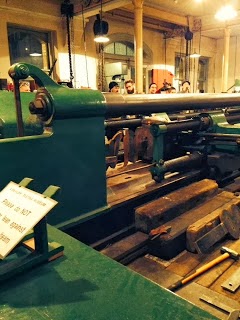 Last night I went along to a demonstration and networking evening where artists and scientists came together to chat, drink wine, amaze each other with the incredible ideas we all have, and especially to watch a demonstration of the Kirkaldy Testing Machine. I can not begin to tell you how incredibly cool this was.

The Kirkaldy testing works is a purpose-built Victorian era building which was built specifically around this enormous industrial age hydraulic masterpiece in 1874. Proudly declaring above the door

the first experiments took place here on iron and steel to determine their breaking point.

So, imagine a large, Victorian brick building with its ground floor housing an enormous labyrinth of pipes and wheels and weights and counterweights and pulleys and levers, stray pieces of metal lying around the floor, weird things hanging from the ceiling, anvils and hammers and then, once it got started, all manner of clanks and grinds and screeches. Magnificent. Last night, they were testing a piece of sculpture created by James Capper, an artist who creates kinetic sculptures based on industrial machinery, inventing new forms and functions for these machines while he's at it.

I was in heaven. This appealed to all my knee-jerk "Gee Mr Wizard" impulses. A room full of weird stuff with a roomful of quirky people all trying to explain and reimagine it. It's interesting to me how I do rather quietly nurture this weird side of my personality. I know I talk a lot about Cambodia and music and teaching, but various aspects of science are continually cropping up in my work. There was my recent contribution to the anthology of science-fiction poetry, Where Rockets Burn Through. There was my first novel, Tangled Roots, with its lost cosmological physicist. And the medical sciences are lurking everywhere in both A Clash of Innocents, and the soon-to-be-released, Out of the Ruins.

Clearly, I love science. But what I love just as much is the magic that happens when science meets art and when scientists meet artists. I think we find each other both funny and fascinating and are equally in awe of what we do and how we think. I love being part of this dialogue between two groups which, when I was growing up, kept themselves separate and were kept at a silly distance.

Question:  What do you get when you lock a group of artists and a group of scientists in a room?
Answer: 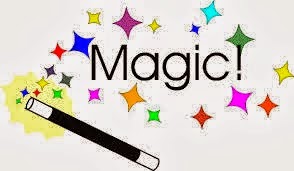