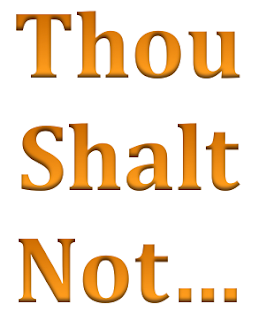 Because of taking another step in their ongoing legal battle, the former owners of the Chymorvah B&B in Cornwall, Peter and Hazelmary Bull, are once more in the news.

These are the people who refused to provide a double room to a pair of civil partners because they believe that sex outside marriage is a sin. I think there is a real problem with their position.

Leaving aside the fact that it seems ridiculous that anyone can impose their own religious rules on someone who is not a member of that religion (note the fuss in the news at the moment about a school allegedly imposing headscarves on non-muslim teachers), there seems to be a fundamental imbalance in the Bulls' position. Let's say, for argument, that they were right that sex outside marriage is a sin. I'd suggest that this is not a reason for refusing to let a room to someone.

After all, Christianity tells us that we are all sinners - so why pick on a very specific (and let's face it, relatively harmless) kind of sin? To pick a couple from the Ten Commandments, surely they should also be banning anyone who covets their neighbour's ass, or to bring it up to date, their neighbour's Porsche? (Carefully selected marque there to prevent myself from sinning, as I don't like Porsches. Now if my neighbour had an Aston Martin it would be a different story.) And how about honouring your father and mother? Shouldn't they be checking that everyone booking a room sends flowers on Mothering Sunday?

Alternatively, how about the good old seven deadly sins? Did they ensure that no one booking a room indulged in gluttony? Did they ban obese people, for instance? What about sloth? That rules out ever letting a room to a student.

This may seem to be trivialising the situation, but it really isn't. These are clear sins as far as the Christian faith is concerned. You can't pick and choose - it should be all or nothing. And as the Bulls seem to have ignored attempting to prevent every other sin, it is bizarre that they felt justified - and continue to this great length and expense - in trying to pre-empt the possibility that this one, particular sin be committed under their roof.