Ancient is not the same as sensible

There are times when I despair at the ability of human beings to assume that just because we've done things a certain way for a long time it must be correct. Thanks to Michael Brooks (right) for pointing out a very sad case of an MP who has demonstrated all too well that he shouldn't have anything to do with running the country. 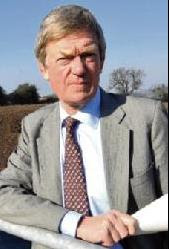 The man's name is David Tredinnick (left), who is the Conservative MP for Bosworth in Leicestershire. This was a man whose parliamentary expenses included the purchase of some astrology software. Hmm. According to the Leicester Mercury, Mr Tredinnick had this to say in response to David Brooks (who is standing against Tredinnick as an independent candidate):

There is a danger that so-called scientists are so set in their ways that they are unable to consider alternative viewpoints. Systems of healthcare in India and China have linked medicine and astronomy for centuries. Are we really just dismissing their views?

It's difficult to know where to start with what's wrong with this statement. Part of the difficulty is hauling yourself off the floor after collapsing there in laughter. But really the response should be horror rather than humour that an elected representative of the people could say this.

Next comes the 'scientists are unable to consider alternatives' defence. This just doesn't hold water (not even homeopathic water). Scientists spend all their time coming up with alternatives. They are much more open to alternatives than (say) MPs, who consider changing your mind to be always wrong. ('You turn if you want to, the lady is not for turning!')

Then the killer. 'Systems of healthcare in India and China have linked medicine and astronomy for centuries. Are we really just dismissing their views?' The simple answer is 'We certainly are.' For hundreds of years, systems of healthcare in this country managed to do more harm than good. Now we know better. All ancient medicine is based on incorrect models of how the body works. Any good it does is accidental. But most of it doesn't do any good.

Let's be very clear. Just because something has been considered true for centuries does not make it correct. In fact, it makes it less likely to be correct, because it has to be based on an incorrect understanding of how the world works. Almost all the scientific ideas of the ancient Greeks were wrong, but they were typically held for over 1500 years before being dismissed. This is no sense anti-Chinese or anti-Indian. Traditional Western medicine was also considered true for centuries, and was also wrong, based as it was on humours, miasmas and 'cures' like bleeding.

Crowning it all is the implication that 'linking medicine and astronomy' can benefit anything. Again, the whole of astrology and astrologically related medicine is based on a fundamental misunderstanding of the solar system. There is no basis, there is no evidence. Please, Mr Tredinnick, think again.

Photo of Michael Brooks from www.popularscience.co.uk
Photo of David Tredinnick from www.thisisleicestershire.co.uk

P.S. I ought to say, given the date that this is not an April fool's joke. I wish it were.