No tactical voting this time round, please! 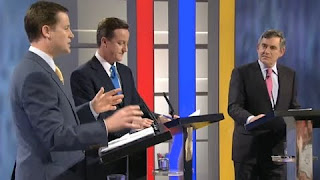 Apologies to non-UK readers - this is a bit of a domestic topic. We've had a couple of days to ponder the leaders' debate, which by general acclaim was 'won' by Nick Clegg for the Liberal Democrats. He certainly came across better than either of the others, especially in his acceptance that we need to do more than fiddle around with imaginary efficiency savings to get out of the financial mess we're in. He also, I think, came across as more genuine - which shouldn't matter, but does in this media-driven world.

As a result of this, a number of people may be thinking of voting Liberal Democrat - and if you are, please do. I think it's an excellent idea. But if you mention this, you will immediately get supporters of other parties muttering about a wasted vote, and how you should vote tactically to keep the worse of the other two parties out, rather than support the Lib Dems who can't possibly win.

This is rubbish. Not that they can't possibly win - I accept that - but that tactical voting is a good idea. If enough people vote Lib Dem a) we are likely to get a balanced parliament (sounds nicer than hung), and so the Lib Dem voice will be heard. And b) if the percentage of the vote for the Lib Dems reaches the high 20s then there's a stronger mandate for electoral reform, so that a sizeable proportion of the vote doesn't result in pitiful representation. If you feel the urge to vote Liberal Democrat, please do. Don't let those miseryguts tell you otherwise.


Affiliation Note: Some of you may have noticed a certain similarity between my surname and Nick Clegg's. As it's quite an unusual surname, we may well be distantly related, but I'm not aware of any connection. What's more, I was born within 3 miles of the spiritual home of the Clegg name, just east of Rochdale, where Mr Clegg is a bit of a softy southerner. However, I still feel he is an all round good egg, whether or not he is my fifth cousin, six times removed.
party politics TV debates voting