Time travel into the future - the energy gap 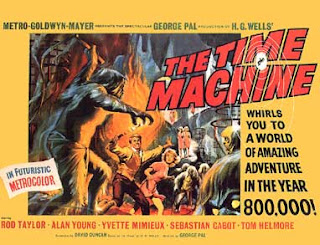 There are times I love my job - never more so than yesterday, when I was doing some work for my next book but one, on the subject of time machines.

I was thinking specifically about travelling into the future. (One thing all fictional time machines get wrong is that the mechanism for going forwards and backwards is identical. In a real time machine you need to use totally different approaches to go forwards and backwards.) In principle travelling forwards in time is a piece of cake. Everyone can do it. I've managed to travel over 50 years into the future. A day at a time.

Unfortunately, unless you also discover a means to totally stop ageing, this isn't a helpful way to return to the future if you've zipped back a couple of hundred years into the past, let alone get to the year 800,000 as the movie poster promises. The rate of a second per second is just too slow. It may be possible to use biological means - effectively to sleep through the time - but this has lots of problems and isn't very elegant. Luckily, physics seems to have an answer in special relativity - certainly it's the means of travelling into the future you generally see described. But when I started playing around with the idea I discovered that it's not as easy as it seems - and I think I've identified what the power source of a future travelling time machine would have to be.

The way you use relativity to travel into the future is often called the twins paradox. Take 25-year-old twins Karl and Karla. Karl stays on the Earth while Karla travels off at high speed in a spaceship. Because of relativistic effects, the time on the ship runs slower than the time on Earth. When Karla returns home, perhaps ten years has elapsed for Karla – but Karl is now 75. The twins are very different ages. Say Karla left in 2050. By her clock it is 2060 when she gets back to Earth. But on the Earth it is the year 3000. Karla has travelled 40 years into her future.

Easy peasy. Except getting up to relativistic speeds is a big challenge. It takes a lot of energy. I plugged in some figures. To get these I made some sweeping assumptions, but it's order of magnitude right. To calculate the energy needed, I just calculated the kinetic energy of the spaceship. If this was all that were needed, the engines would have to be 100% efficient, there would be no resistance to flight from obstacles, and I've assumed there is some way of getting the energy back when you turn around and stop at the end (which there isn't), so my figures should probably all be multiplied by 4. (There are more assumptions, but they are a bit boring.)

So how much fuel would you need to produce this much energy? It depends what you're using. In Back to the Future they use a car, so let's try petrol. You'd need about 60 billion tonnes of that. Quite difficult to carry along with you. Luckily, nuclear fuel packs in much more energy. You'd only need 31,000 tonnes of that. But it's still too much to carry. There's only one hope. If it's good enough for the USS Enterprise, it's good enough for us. The most compact source of energy is antimatter. You would only need 31 tonnes of that. (Of course, there is the teeny problem that we only produce about a millionth of a gram a year of antimatter at the moment, but hey...)

We know using special relativity to get into the future is possible. It has been done with atomic clocks, which measured a tiny shift on the travelling clock. But to make the shift worthwhile there's a huge problem of having enough fuel to make it happen. Even with antimatter, if you take away my assumptions you would need more mass of fuel than the mass I'd assumed we were moving - which implies that we're never going to get as fast as 90% of the speed of light. It seems that travel into the future is always going to be a slow process.
physics time travel