Chinese whispers on the web 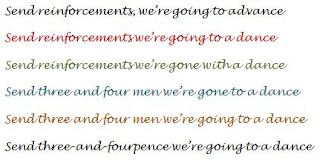 I've never really seen the point of the 'game' Chinese whispers. The one where you pass a whispered message down a chain of people and supposedly at the other end it comes out garbled. But there's one way that the World Wide Web (doesn't it look old fashioned to say 'World Wide Web' now?) can perform an interesting variant on this.

When a few years ago I wrote my book Light Years, I incorporated a little quote from Max Planck. Planck was responsible for the fundamental concept that started off quantum theory - that light comes in little packets or 'quanta' rather than as a continuous wave - but he was not happy with it as a real concept. It was only a fudge to make the maths work.

The quote I used is this:

The whole procedure was an act of despair because a theoretical interpretation had to be found at any price, no matter how high that may be.

According to lots of  websites (and a fair number of books), Planck wrote this in a letter in 1901. But none of those quoting it ever say who it was a letter to. After some digging around I discovered that almost everything is wrong here. It's not an exact quote, but rather a conflation of two parts of what he wrote with a spurious link. It should read:

In short, I can characterize the whole procedure as an act of despair, since, by nature I am peaceable and opposed to doubtful adventures… a theoretical interpretation had to be found at any price, however high it might be.

This was written by Planck in 1931, 30 years after its usual attribution, in a letter to the American physicist Robert Williams Wood.

Of itself this isn't earth-shattering. The sentiment is right and the date is a nice-to-know rather than anything of great significance. But it illustrates well what happens all too easily online. Someone (it could well be the usually excellent St Andrew's biographies of mathematicians) put the original quote in (perhaps from memory, given the lack of a reference). Other sites copied this. It gradually took on the nature of semi-fact, because quite a few respectable sources had it in this form.

I'm not saying because of this that the web is universally a dubious source of information. There's lots of good stuff out there. But it does show how easy it is for an error to take on a false sense of correctness through repetition. (Climate sceptics take note.)
history of science quotations web