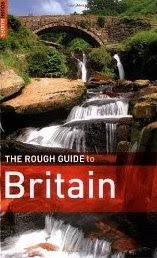 For my birthday I received a copy of the Rough Guide to Britain, and jolly good fun it is too. Rather like my nostalgic copy of England on $10 a Day, one of the best bits is the attempt to explain to foreigners how to enjoy Britain, and what's good and bad about the food, beer and so on. (I found the food part rather patronising, as it half wanted to sneer at the way some places still served old fashioned pub food of the nasty variety, yet at the same time rather bemoaned the way a lot of pubs have gone up-market. Get your act together, Rough Guide.)

Now there is a tradition the world over, just as we all have a tendency to Google ourselves, to look up places that are special to us when presented with a gazetteer. My birthplace, Rochdale, doesn't get a mention - fair enough. It's not exactly a tourist destination, unless you are into Co-operative movements. But my current place of residence, Swindon is a bit different. It is, after all, site of the impressive railway museum, Steam, not to mention the National Monuments Records Centre and (nearby) the remarkable Science Museum library.

I couldn't find Swindon in the index, but I know a bit about indexes and they are fallible at best. So I thought I'd check the text. The Guide helpfully has maps that show which section of the book a place falls in. The obvious one was Wiltshire - but Swindon was just off the top of this. It's not entirely surprising, as Swindon is right at the tip of Wiltshire. So I looked at the map above... and Swindon was just below the bottom of it. Yes, they have actually left a gap between the maps to exclude Swindon.