Probability that mangles the mind

May 31, 2010
Generally speaking I'm a bit so-so about recreational mathematics. I can't get very excited about polyominoes or tiling, for instance. But when the field strays into probability I get fascinated - and the mind gets boggled. Take the little probability problem mentioned in the New Scientist article I've linked to there. It gets rather lost in the article, and they don't describe it particularly well. Let's take a look.

A knee-jerk reaction to this is to think 'One's a boy - the other can either be a boy or a girl. So there's a 50:50 chance that the other is a boy. The probability that there are two boys is 50%.' Unfortunately that's wrong. 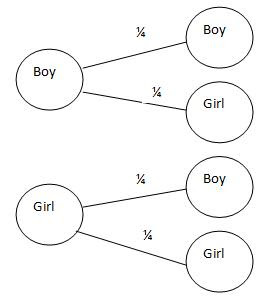 All the combinations except Girl-Girl fit our statement 'I have two children. One is a boy.' So we've got three equally like possibilities, of which only one has two boys. So there's a 1 in 3 chance that there are two boys.

Now we're equipped to move on to the full version of the problem. I have two children. One is a boy born on a Tuesday. What is the probability I have two boys?

Again, gut feel says 'The extra information provided can't make any difference. It must still be 1 in 3.' But startlingly, the probability is now 13 in 27 - pretty close to 50:50.

Each of these fourteen first children has fourteen second children options. Second boy born on a Sunday... etc.

Common sense really revolts at this. By simply saying what day of the week a boy was born on, we increase the probability of the other child being a boy. But we could have said any day of the week, so how can this possibly work? The only way I can think to describe what's happening is to say that by limiting the boy we know about to a certain birth day, we cut out a lot of the options. We are, in effect, bringing it closer to the sort of effect we get by saying 'the oldest child is a boy'. We are adding information to the picture.

The probabilites work. You can model this in a computer if you like and it's correct. But what's going on mangles the mind. Don't you just love probability?

(I ought to say, by the way, that this isn't quite a match to reality. It assumes there is an equal chance that either child is a boy or a girl, and that there is an equal chances of being born on each day of the week. In reality neither of these is quite true, but that doesn't matter for the purposes of the exercise.)
mathematics probability problem solving