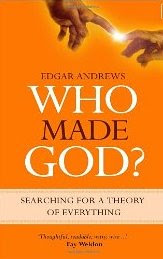 Ever since Richard Dawkins came out with The God Delusion there have been a string of books, most of them not very good, doing the reverse - trying to demonstrate that in a rational, scientific world, God is not such a stupid idea. I've read two recently.

The first was, Who Made God by Edgar Andrews (see at Amazon.co.uk and Amazon.com), which while surprisingly good in some ways, suffers from the typical flaws of such books, whether of theist or atheist persuasion.
Using these links earns us commission at no cost to you

Andrews is a scientist (to be precise, Emeritus Professor of Materials at the University of London), and the book contains a fair amount of science, particularly physics, well presented in a light, if occasionally irratingly breezy way. The science content would merit this book a reasonable write-up on the www.popularscience.co.uk website were it not for the rest.

There's even quite a lot that makes sense outside the science part, as long as you suspend the knee-jerk reaction many involved in science have to even considering religious matters. Andrews points out that science can never really answer 'Why?' at a fundemental level. So, for example, it can describe how gravity works, but not why gravity exists. (If you think it can, just ask 'Why?' to your next level of explanation. At some point you will hit a problem.)

As far as it goes, the approach works pretty well. I particularly like his look at the nature of life itself, and how that could have emerged, genuinely pointing out some problems with an 'Emerged from nothing, all of a sudden,' approach. He's on more shaky ground when talking about evolution - some of his basic statements about evolution seemed patently wrong, so the rest of the process was seriously flawed. He asks questions along the lines of 'Why should evolution do this?' as if evolution had a purpose - but that misses the whole point, that evolution isn't directed.

He also avoids many of the difficult questions. For example, if man is directly designed by God, as he implies, why are there are all those flaws in the design, like the back-to-front sensors in the eye?

Things get worse, because Andrews isn't doing what he claims. He's not testing the hypothesis 'Does God exist?' but rather 'Assuming the bible is true, does God exist?' A lot of his arguments are based on the assumption that you can use the bible as much more than a fallible commentary written by human beings. And that opens a whole other can of worms that he doesn't acknowledge.

He refers, for instance, to both of the creation myths in Genesis - the one about God creating the universe in six days, and the one about Adam and Eve, but doesn't point out that the two are incompatible, something that doesn't matter as many Christians interpret them, simply as two myths each with a different message, but which presents a real problem if you take the stance that the bible is inerrant revelation and this is, in effect, history, which seems close to Andrews' view. The video at the end of this post is a good illustration of why there are problems with approaching the bible this way.

So a nice try, and probably a better shot from the pro-God camp than The God Delusion was for the other side. But no cigar. 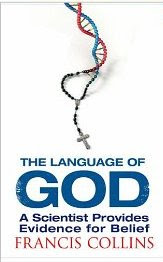 The second book, despite having more theology and less science, is much, much better. In fact it's by far the best book of this kind I've ever seen. Called The Language of God (see at Amazon.co.uk and Amazon.com) it is by Francis Collins, a biologist and the one-time director of the Human Genome Project.
Using these links earns us commission at no cost to you

Although there's a bit about the Big Bang, most of the science in this book involves genetics and evolution, and unlike Andrews, it's obvious that Collins knows what he is talking about here (not surprising, really).

Collins was an atheist and describes why he came to a Christian belief, and how he thinks that it is not incompatible with science, and has no problem at all with evolution. This requires him to take some aspects of the bible, like Genesis, as illustrative story rather than history - he accepts that a surprisingly high percentage of Americans consider the bible to be absolute truth, but shows, without ever being aggressive a la Dawkins, why this really doesn't hold water, and certainly isn't a necessary view for a Christian.

Although this book isn't built around science in the same way that Andrews' is, it makes telling use of science, and altogether I think provides by far the best counter written to The God Delusion. You don't have to agree with Collins' religious beliefs to find this a very readable, well-argued and useful contribution to the field. Recommended. (see at Amazon.co.uk and Amazon.com)
Using these links earns us commission at no cost to you

And finally... that cartoon. If you do believe that the bible is absolutely true and perfectly consistent, I recommend that you don't watch this, as it will make you really irritated.