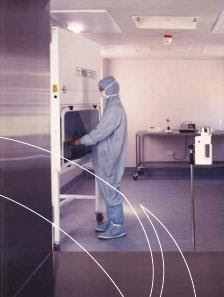 Yesterday, in the latest of my series of visits to science and technology sites in Wiltshire with BBC Wiltshire's Mark O'Donnell, we headed off to Porton Down.

Located in pleasant countryside between Boscombe and Salisbury, Porton Down has a scary history. Set up during the First World War to produce the likes of phosgene and mustard gas, it moved on in the 1940s to work on biological warfare, including making weapons from anthrax. After the Second World War, the nerve agent VX was developed at Porton Down, and they contributed to the developed of CS gas, plus becoming notorious as a site where army guinea pigs were subjected to various chemicals to see how they reacted.

But things have changed in a big way. The UK hasn't made chemical or biological weapons for 50 years, and though part of the site still belongs to the MOD, working on ways to protect the military from these kinds of weapons, the main part of the site is now all about saving lifes. Here they look at ways to stop exotic pathogens from plague to swine flu, and develop vaccines, perhaps most successfully in a vaccine for T-cell leukemia.

Things still felt a little tense when we went in. At the gatehouse we were relieved of cameras and mobile phones - but the reception from the acting director and communications manager was very friendly, and the story of their work (bearing in mind I didn't even realize until hours before that we were visting the Health Protection Agency, rather than the MOD) fascinating and surprising.

In a quick tour we came across people giving advice to GPs, dealing with strange symptoms of individuals who have returned from abroad, and peered into a lab (through thick glass) where one of the really nasty bugs (I think it was Dengue Fever) was being handled. This was a bit like the photo (from the HPA Annual Report), but the lab workers didn't have protective clothing, as the nasties never leave a linked series of cabinets.

Perhaps the most remarkable thing was that you didn't feel worried... that and the presence of the children's creche/playgroup by the entrance to the site, a juxtaposition that emphasizes the changed role of Porton Down, once a feared name and now doing real good for the health of the nation. Makes you feel quite patriotic.

BBC Wiltshire has now started broadcasting our visits in snippets spread across the week on Mark's show between 9am and 12 noon weekdays.
bacteria science viruses Wiltshire