Is this book a pointless rant or a brilliant analysis of our world? 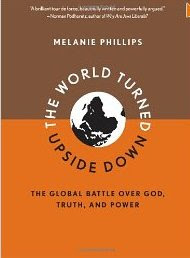 I don't know who Melanie Phillips is. Don't get me wrong, I've heard her on the radio and seen her on the TV often enough. Whenever they need an opinion, forcefully (nay, spikily) put, she's one of those they wheel out. But I don't really know why. If I'm honest, I read this book with the intention of slagging it off. I had heard that Melanie Phillips pushes global warming scepticism to the limit, and I wanted to hit back at this. I am still of the opinion that she's wrong about global warming, but there was actually much about the book I liked.

It starts with a description of how, perhaps as a response to the decline in organized religion, we've seen a growth in the assorted areas often referred to online as 'woo' - anything from crystal healing to alternative medicine.  Philips uses two compelling examples in Diana, Princess of Wales and Barrack Obama where arguably a whole sentimental/emotional wash of feeling was able to totally overcome rationality. (I'm not saying I'm anti-Democrat or anti-Obama, by the way, just that a lot of tosh was talked as if he was about to transform the world. Dave and Nick, please note.)

A wonderful surprise. What I thought was going to be an anti-rational book is actually pro-rational and logic. Excellent. And as we'll see in some later chapters this is quite effective. But we need to get climate change out of the way first.

Phillips makes some reasonable points on the unreliability of climate models, but a lot of her climate change chapter is just digging up the old, long dismissed arguments like 'historically, carbon dioxide levels went up after temperature rises, rather than before.' The Royal Society has a nice document listing all these repeated arguments and what's wrong with them. The problem with Philips' anti-climate change argument is neatly summed up by someone else:

Some of the claims… turned out to be flaky or untrue… But to say, as so many have done, that therefore all such claims were false, and even amounted to a deliberate and collective lie is not sustainable. Obviously, calibrating a risk involves assessing all the evidence in the round.

This is Phillips herself, talking about the Iraq War - but her argument could be exactly applied to climate change. There have been a few errors, as there always are in science, but to use them to suggest the whole vast weight of evidence and support of so many scientists is untrue is just wrong.

The book next covers the Iraq War, and (assuming the statements are more accurate than those in the climate change section), makes a telling point about the Weapons of Mass Destruction argument being much sounder than it has since been re-written to be - she's quite convincing here, as she is on the validity of Israel and its right to self-defence. This doesn't justify Israeli all of Israel's actions, but makes it clearer why things aren't as cut and dried as some would present it, which is useful.

From here the book's main themes develop, which I'll come to in a moment. However, it's worth saying the way they are developed is tedious in the extreme. She is so repetitive - you could cut the book to one third its length and not lose a single argument. She will also never use two examples when she can give 20, so you get list after list of examples of a particular thing. This isn't a good way to bring people along, it's a turn-off.

I suppose the big themes are Islam, antisemitism, the decline of Christianity (particularly in Britain) and the treatment of Israel. Again, there's a lot here to agree with, if you can cope with the repetition. I think she is rather selective in her support for Israel - it's absolutely true it's a country established by the UN that has the right to defend itself, but not to do so by retaliatory attacks. It's as if we'd bombed Dublin for what the IRA did. This is a shame, because much of what she says is sensible. Similarly, her attack on the Church of England is weakened by using small examples of silliness to attack the whole. So she claims, for instance, that the CofE largely abandoned any interest in Jesus, and that 'churches up and down Britain' replaced their Christmas manger scene with a tableau of the Israeli defence barrier. I'd be surprised if it was more than a handful - I've never heard of this.

However, she does a valuable service in bringing out the way Jews have been unfairly demonized, the totally inconsistent approach of our intelligentsia to different religions (basically Christianity/Judaism bad, anything else good), the unthinking support for the idea that multiculturalism has to be good (as long as it's not our native culture) without any logic behind it, and, yes, despite all the problems, the unthinking hatred of the country of Israel that stops rational assessment of what's happening and how we respond to it. It's knee-jerk stuff, and when that comes in, rationality goes out of the window.

So it's a shame she drags in climate change, utterly irrelevant to the main thread of the book and misleading because she's so wrong. It's also a shame she's so repetitive (have I repeated that enough yet?) and tends to draw wide conclusions from small amounts of data when it suits her. But there's a lot here that needs to be said.

P.S. Love the image on the front - it always amazes me how totally unrecognizable the Earth is upside down.