Douglas Adams lives on at CERN 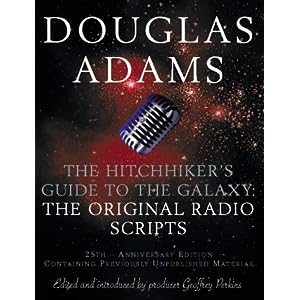 I'm a big fan of Douglas Adams' work, though I don't believe he ever quite achieved the same manic wonder with his books that he did with the original Hitchhiker's Guide to the Galaxy radio scripts. I am less certain, though, about his obsession with Apple computers as it gave his ideas on technology a gloss where style was more important than substance.

Specifically in one of his books (I think one of the Dirk Gently books, but I can't be bothered to check), one of his main (if dead) characters is an entrepreneur who makes his money out of add-on software for spreadsheets that turns the financial data into music. Somehow you can spot bad company results by discords or some such guff. You really have to be blinded by the technology to really imagine accountants responding well to a package that only runs on Apple and that turns your finances into electropop or Stockhausen.

The reason I bring this up is a BBC report (genuine, unlike my news from the USND at Hoople yesterday) that 'Scientists have simulated the sounds set to be made by sub-atomic particles such as the Higgs boson when they are produced at the Large Hadron Collider'.

Unfortunately the idea that they have simulated the sounds 'made by' particles is rubbish. They aren't simulating the sound of collisions. What they are doing, a la Adams, is representing the data from collisions musically, with position represented by pitch and energy by amplitude. It's really no surprise when we discover that a composer is involved in the project. Yes it's one of those half-brained, waste-of-tax-payers'-money attempts to do a science/arts crossover. (Where's the Chancellor's axe when you need it?)

But to suggest that this is seriously going to be used to analyze the data is insulting our intelligence. A software engineering is quoted as saying When you are hearing what the sonifications do you really are hearing the data. It's true to the data, and it's telling you something about the data that you couldn't know in any other way.

I'm sorry, leaving aside the irritating word 'sonifications', this is balderdash. It may make it easier to spot certain very specific things than it is if you check the data by eye. But who is going to check it by eye? A proper computer analysis would be able to spot anything the ear could pick up from the sounds, and much more. It's a gimmick. You can either look at it as a silly art project or a good way to get publicity. But I no more expect particle physicists to start analyzing data by digging the musical vibes (man) than I expected Adams' accountants to be jiving to the company reports. It's not going to happen, and I'm rather disgusted by the BBC science reporting that they reported it straight without the hint of a raised eyebrow.

Want to know more about the Original Radio Scripts? See at Amazon.co.uk or  at Amazon.com