Is this the write gene? 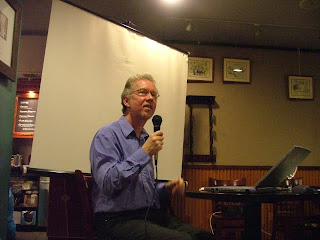 From the BBC Science Correspondent
Scientists at the University of Southern North Dakota at Hoople announced today that they have discovered a relationship between a relatively unusual form of the gene Pax2t and the urge to be an author. In a state-wide trial it was established that a variant of this so far unremarkable gene makes it impossible for an individual not to write. The gene is also responsible for our tendency to 'nest build' which has led to the suggestion that for authors, books are in a very real way their children. It is hoped that with further research it will be possible to develop drugs to target the gene and correct the mutation.
Okay, you guessed, it's not true. The university so far best known for its discovery of P.D.Q. Bach has not come up with a 'writer's gene', though it's interesting to speculate whether the urge to write is a mutation that really ought to be corrected.

What does appear to be the case is that many writers are driven. There seems to be a strong divide between people who feel 'they have a book in them' or 'would really like to write a book when they get round to it' and those who simply can't help churning out text. (Perhaps, in this sense it's more a written Tourette's than a nest building phenomenon.)

The strange thing about this is that writing is such a modern concept. In genetic terms it happened yesterday. So clearly it's a distortion of something else that was already there. I can't think it's a general urge to communicate, because a lot of good writers aren't particularly good at talking to people. But there has to be something behind this often irresistable urge to put words on paper. With a lot of other authors, I'd say that writing isn't something I choose to do, it's something I have to do. But why? I await the next press release from Hoople with interest.


Photo by Peet Morris, titled by the photographer 'Come over here and say that.' It shows an author, attempting to communicate, in Blackwells, Oxford.
authors genetics writing