How do you consume news and comment? The enrichment of bloggery

June 21, 2010
My parents always took a newspaper. When I was young it was the Manchester Guardian, for instance, though their reading matter drifted more right wing with old age. It was absolutely assumed when I was at school that one would take a paper - there was even discussion about the merits of different rags as a part of setting us up for life. But I never have.

Don't get me wrong, I buy newspapers, but on an ad-hoc basis. If I've got a bit of time to spare, as a treat. Actual news I get from the TV and the interweb. In fact I think it's time we examined just what news is, and how best to get it.

Just as it's being suggested that banks are split into two parts - the high street, basic banking functions and the speculative, risky actions, perhaps it's time we more explicitly divided our consumption of news. Part of it is reporting on what's happened (or in the case of Radio 4's Today Programme, speculating about what will happen later today). Part is opinion. Traditionally these have been packed into the same bundle, but it's a bundle that is coming unravelled. Perhaps we should accelerate the process.

When you think about it, isn't a paper document published the next day a pretty terrible way of getting news? It is, after all, out of date before it's printed. So why bother? How about, instead of newspapers, selling commentpapers. Okay, you could have a one page summary of the news, but the rest would be just comment, opinon and analysis. We've already had the news the day before from broadcast sources, let's enjoy some risk and speculation, just like that second arm of the bank.

This is also where blogs come in. They are the comment section alongside online news services - and already run separately. Although I do buy newspapers, I much more regularly stock up on comment from blogs - and I think every sensible reader should be. 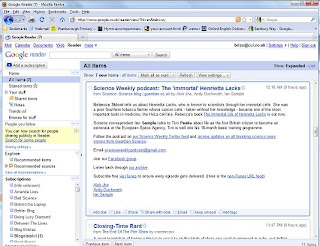 If you aren't doing this already, the two essentials are to get holder of a blog reader, and to get in a habit of making a note of blogs you come across that are interesting.

For blog readers I'd recommend starting with Google Reader, as it's simple and easily accessible. Just go to Google, click on the little drop down at the top that says 'Reader' and you're there. Once you've set it up you will see the latest posts from all your favourite blogs, so you can have a quick 10 minute boost of opinion and comment whenever you fancy it.

Of course, just having the reader is no use without selecting content. You might want to search out a few blogs to add to begin with (including this one, of course). But then, just add them when you serendipitously come across them. You might be directed to a blog from Twitter and find the post interesting, for instance, or see a reference from a news item. Try for a mix of blogs - some on general topics, some matching your own areas of interest. 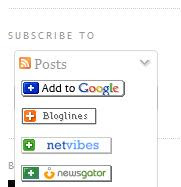 Add the blog. With most, if you are using Google Reader, this is as simple as clicking on the Add to Reader button, often found under a 'Subscribe to Posts' widget or similar, like the one to the right of this blog. If there isn't such a facility, just copy the URL of the blog, the pop over to the reader, click on 'Add a subscription' and paste the URL in.


If after a few weeks you find you are skipping through all the posts from this blog, simply weed it out of your list. (I would leave it a few weeks, because any blog can have a run of a few poor posts.) That way your list evolves, always interesting, always expanding on your current interests.

I'm not saying abandon newspapers - but it is worth thinking a bit about just why you read them and what you get out of the process.
blogs comment columns news opinion