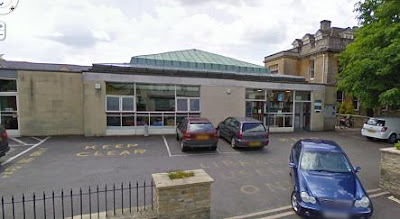 I had a very enjoyable evening last night, speaking at the Wiltshire Words event in the library at Corsham. The idea of the event is to bring various authors, many with Wiltshire connections, along to local libraries for different events. I think this is great - it's a shame more libraries don't do this kind of evening.

One of the things that was particularly enjoyable was that it was quite cosy. There was tea and cake, and we were in a compact enough space for the discussion at the end (I was covering Ecologic, which always evokes a fair amount of discussion) to be very much among the whole group, rather than just Q&A.

They've had a great collection of authors along and there's still a chance to catch some if you're in the Wiltshire area. Highlights coming up include a creative writing workshop at Devizes tonight (2 June), Piers Bizony on Space Tourism (tonight in Warminster) a Roald Dahl party at Bradford on Avon tomorrow afternoon, David Aaronovitch on conspiracy theories at Bradford on Avon (7.30 on 3 June), and amazing trio of Lucy Diamond, Sarah Duncan and Veronica Henry at Corsham (7.30 on 3 June), Sue Mongedien at Westbury on Friday (4th) afternoon... and much more. Take a look at the programme. Now.