June 20, 2010
Until I went to work in the British Airways OR (Operational Research) department, my use of keyboards was pretty limited, but once there I was spending all day programming various models. I was never formally taught to touch-type, but I just picked it up by habit. 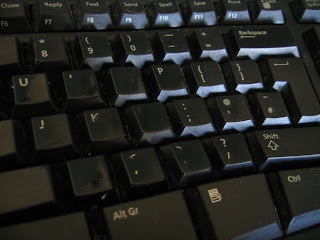 It's one of those strange abilities, because if you ask me where an X is on the keyboard, I couldn't tell you. But if I have to type 'X' I can do it without looking.

And that's just as well - because my keyboard is showing distinct signs of heavy usage. Specifically, quite a lot of the letters are starting to wear off. Because I do touch type, it's not a problem for me - but it's quite amusing when someone asks to borrow my computer.

First they are thrown by the ergonomic keyboard, where two parts are split into separate blocks, at an angle to each other with a biggish gap in between. I began using these about 10 years ago, when I started to suffer from wrist pains after typing and find them absolutely brilliant. But it is, I admit, slightly offputting if you are used to the usual layout.

Then they start to hunt-and-peck type. And it's all 'Where's the O? What happened to C? M must be somewhere.' 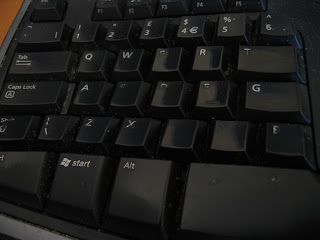 Interestingly, although it's starting to disappear, E isn't the most worn character - all these seem to be in the lower two rows, which suggests I use less force on the upper keys, a reasonable suspicion if you think about the different angles your fingers are at.

So next time you ask to borrow my computer, unless you are a touch typist familiar with ergonomic keyboards, prepare for some keyboard roulette.
computers keyboards typing