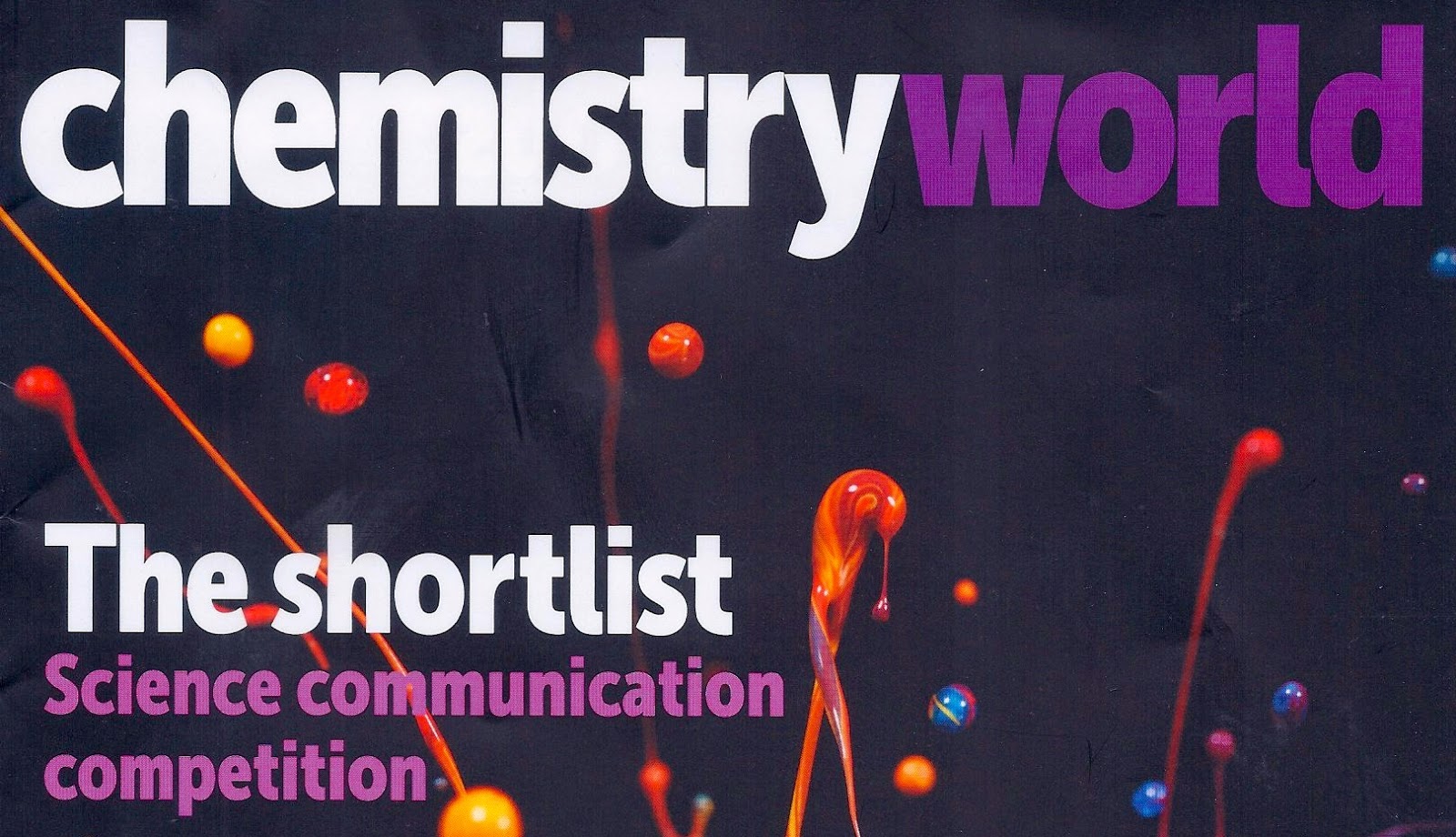 Last Friday I spent a fascinating day at the Royal Society of Chemistry's swish headquarters in Piccadilly (to be precise, in Burlington House, to the right of the Royal Academy). The event was the final of Chemistry World's science communication competition.

I really didn't know what to expect, but after a rather drawn-out arrival tea and coffee (because the judges couldn't make their minds up in the time available), the day began with short pitches from the 10 finalists who had written an article and now had presented a 'poster session' to the judges on their personal take on the theme of 'art and science.'

Now, to be honest, when I heard the topic, my bullsh*t detector went into overdrive. I find the money poured in to projects where artists hang around a science facility than produce some generally forgettable result that is somehow inspired by/linked to/giving extra depth to the work a little nausea-inducing. This is especially the case when sadly, as all too often happens, the suggestion is that the art in some way makes the science more approachable to the public. It doesn't.

However, to give them their due, most of the finalists had taken a different tack and were either dealing with the impact of science on art (for example, exploring the way that van Gogh's reds have changed over time) or that science was used in the creation of art. And the results were fascinating. What's more, the articles were very readable, especially bearing in mind that most of the participants were graduate students with little or no experience of science communication.

Probably the best bit of the day was the lunch. (That makes it sound like a jolly, but it wasn't - you have to be paid for it to be a jolly.) In part this was due to the imagination that the catering team put into the presentation of a lunch served by people in white coats, using lab utensils. The buffet was so visually striking thatfor a little while no one dared approach it.

After a teensy problem of very limited space to eat other that standing up, which would require four hands for knife, fork, plate and glass (I led a rebellion that broke off into the building's reception seating), the best part of lunch turned out to be an opportunity to go around the poster sessions. If you haven't been to an academic conference of late, these started as people standing in front of a poster they had created, talking about their topic (hence the name), though mostly these versions were videos or computer presentations. Not only did you get a chance to find up more about the subjects up close and personal, tasting chocolate and macaroons and sampling delicate perfumes (though it was too close for some on the 'stench of purple' stand, where you had a chance to sniff rotting sea snail odour), but also there was a chance to ask questions of the finalists, who made a great job of it.

So to the actual entries. I'm not going to go through all ten here (I had hoped to point you to details of them online, but I can't find them), but I will mention feeling rather sorry for two finalists who weren't there and did their pitch by video, one entirely inaudible while being represented by an incomprehensible silent video in the poster session. They really didn't stand a chance.

I must give an honourable mention to one of the runners up, Wei-lun Toh, who, remarkably, is a first year undergraduate. Not only was his slideshow about the whole range of ways that science could be used to determine that Han van Meegeren forged a supposed work by Vermeer fascinating, he added the delightful concept of using a limerick on each slide (some shockingly bad, which added to the appeal) to help reinforce memorability and make the presentation more fun. I would have given him first prize.

However, I should also say that the winner's story about the use and re-discovery of Egyptian blue, one of the first ever blue pigments, and the first synthetic pigment was fascinating, making Paul Brack a worthy winner. Especially when he said in his pitch that he groaned when he heard the topic, because he wasn't interested in art.

Overall an excellent day - I'm glad I went and I congratulate the RSC (and their sponsor Akzo Nobel) for a great event. I hope some of the participants go on to do more excellent science communication - and here's to next year's shindig!