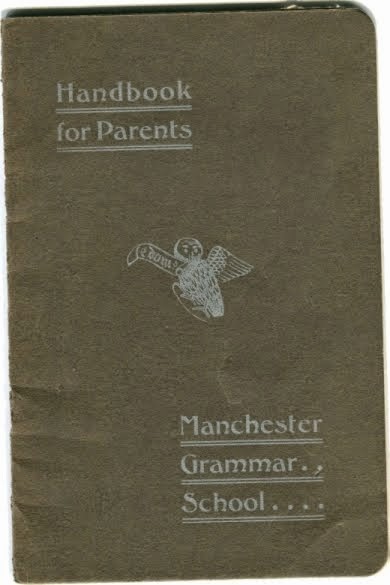 My old school, the Manchester Grammar School is celebrating its 500th anniversary this year with various goings on, including a 'history in 50 objects' series.

I was struck by a recent entry, on the 'Handbook for Parents' illustrated here, published in 1922. Inevitably, part of the attraction is the period feel of the instructions that the powers-that-be felt should be passed on to the boys. At the time, the school was located in the centre of the city, and it was sternly observed that


Boys are forbidden to smoke, or to enter public billiard rooms, smoking cafes or smoking carriages on the railway. No boy is allowed, without special permission, to enter Victoria or Exchange Stations in the dinner interval.

There is also something of a spirit that has perhaps been retained more in our public schools, but thankfully was largely absent from MGS by the time I attended, when parents are informed that


A boy should be trained to get up sufficiently early to allow time for a cold bath…nothing is equally tonic and bracing for the day’s activities, or a better safeguard against catching cold... Frequent indulgence in the theatre or the picture-palace is as harmful and wearing as gardening or carpentry is useful and restful.

That was them told.

But the thing I found most fascinating was that at the time the school was divided in an antiquated structure from day one, as soon as a pupil arrived, between the 'classical' and 'modern' sides. The modern side (described as 'the natural resort of the boy who aims for business') covered science and modern languages, while the classical side (you're ahead of me) specialised in the classics and history. But what is particularly interesting is that the classical side was aimed at the 'Higher Civil service' and the learned professions, such as the Church, the Law and Medicine.

So even as recently as the 1920s, less than a century ago, medicine was not really considered as a scientific pursuit. It easy from the outside to equate medicine and science, but there is a distinct tension between the two sometimes. This background as a career that would be best grounded in the classics is perhaps a good indicator of where that tension originated. Things have, of course, changed hugely - but I can't help but confess I sometimes see more of that classicist in some GPs than the viewpoint of a modern scientist.