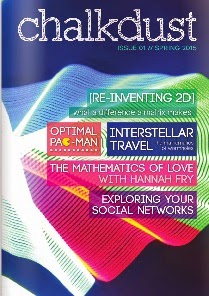 Okay, here's a word association test. What's the first thing that comes to mind when I say... mathematicians? Hands up how many of you said 'Fun'? What, no one?

If you are a mathematician, or a physicist making heavy use of maths, you may feel there's plenty of fun in your world, but just in case you needed a bit more, I can highly recommend UCL's new e-magazine for mathy people, Chalkdust. (Rather an odd choice of title - a bit like a computing magazine calling itself Abacus. But we are dealing with mathematicians.)

What I ought to say straight away is that Chalkdust (my spellchecker insists on converting that to Chalkiest) is not a magazine version of an Ian Stewart type, light and fluffy popular maths book. This is a magazine that doesn't shy away from including the equations of general relativity. But having said that, you don't have to be a genuine, heavy duty mathematician to get something out of it. When I was at university, my maths supervisor gave me some excellent advice, which was 'if the maths doesn't make sense to you yet, just go with the flow, keeping going and it will gradually fit into place.' If you take that kind of viewpoint, looking at the scarier equations, but not worrying too much if you don't understand them, it has something for anyone who has A-level maths or more.

After all, who wouldn't love a mathematical analysis of Pac Man, producing the optimal strategy, or an exploration of the mathematics of wormholes? Okay, quite a lot of people - but I did.

There are parts of the text that feel a touch amateurish, perhaps reflecting that it is produced by students. This was particularly the case with the (very) long interview with Dr Hannah Fry, where the wording sometimes seemed like the work of a 12-year-old, for example:

Hmm. It would also be sensible, if they want some history of maths, to talk to someone who is better informed, as the section on Ada King, Countess of Lovelace had a number of historical inaccuracies, notably:


And if she had [done the 'PR' for Babbage's Analytical Engine], who knows what would have happened. The analytical engine could have been built and then the first computer could have been created a hundred years before it actually was.

Well, no, it couldn't have been built, because the analytical engine would have required engineering that was far beyond the capabilities of the time, if it could be constructed at all in mechanical form. It's also an exaggeration (if frequently repeated) to say that King 'wrote the first program' for it. It would be more accurate to say that she translated a paper about the analytical engine written by Luigi Menabrea from French into English, adding a long set of notes in which she described how the machine might be used.

Inevitably a production like this is a trifle hit and miss - but if you take your maths seriously, you could find a surprising amount to interest and entertain you. Sounds worth popping over to straight away. Or at least, after solving* the travelling salesman problem and discovering the best route.

* I know, I know. It was a joke. If you don't know why it's a joke, this might not be the magazine for you.