No, I don't want a super car experience, thank you 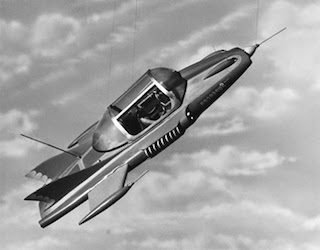 Every now and then I get a semi-spam email (i.e. something I probably accidentally signed up to receive, but never really wanted) offering me the opportunity to buy cut-price 'treats', like a super car experience. I know some people love this kind of thing, but I just don't get it.

I've got three problems with the whole 'super car experience' thing. (If your mind is heading back to the early Gerry Anderson series, illustrated here, which I loved as a boy - our Ford Anglia was excellent for playing Supercar, as the heater controls made an excellent substitute for the throttles, and it even had little wings on the tail - I am not referring to Supercar, but rather an 'experience' day where you get to drive something like a Ferrari or an Aston Martin.)

My first issue is that I wouldn't actually want one of these cars as they are incredibly impractical (anyone remember the Top Gear where they tried to get 3 out of an underground car park in Paris?), ludicrously expensive and make a silly noise. I've never understood the appeal of the sort of noise boy racers try to imitate by having a dustbin in place of an exhaust pipe on their Ford Fiesta. It sounds loud, nasty and industrial. My favourite car noise is an electric car - but that's a different story.

The second problem is that they wouldn't just give you the keys and say 'Have fun,' they would expect you to drive it around a track, with experts looking on and sniggering at your inability to 'take the correct line' or brake at the sweet spot, or G spot or whatever it is. I did once accidentally go to a track day, and quite enjoyed being driven around by an expert (scary though it was), but there was no way I was going to do it myself, in front of others.

Most importantly, though, if I did have a drive in a super car (and if I did, it would be an Aston Martin, no question), it would have to be my own. I don't understand the envy-driven gratuitous excitement of having a go at something you can't actually have. It's a phenomenon that's quite closely related to pornography, perhaps most closely in those house porn 'Escape to the Country' style house programmes where people who are selling a 3 bed semi in London look round 10 bathroom mansions in the country, which normal people could never afford, so they watch the programme to drool instead. It's one of the nastiest aspects of capitalism.

So there you have it. Super car experiences are for those whose existence is unsatisfactory. Get, as they say, a life.