A new brand of revolution 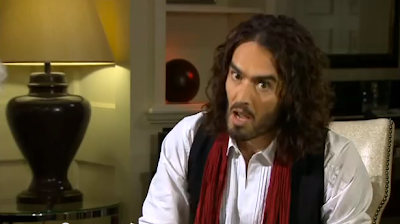 Like many, I watched online the interview between the UK's leading political interviewer, Jeremy Paxman and comedian Russell Brand with interest. It brought out, as has quite frequently been the case over the last few years, the way that Brand is not just an idiot who can offend people on radio programmes and/or a sex addict - he is very verbally able, and has thought about things in what is, admittedly, a rather shallow, but nonetheless interesting fashion.

I can certainly see why Brand could get many rallying to his cry that politicians don't do anything for us and that democracy is flawed. But there is a real problem with Brand's approach to politics - and it is reflected all too often in the over-the-top, knee jerk political comments I frequently see on Twitter and Facebook. It's a problem that is often reflected in protest movements - they're against something, or everything (think capitalism, conservatives, politicians, America, big business, corporations whatever) - but they don't actually offer a better alternative.

We know from practical experience that Marxism does not of itself offer a great alternative to capitalism. I'd go further - for the vast majority, Marxism proved far worse than capitalism. It's all very well to slag off democracy and capitalism, but be very wary what you wish for. Because the alternatives have so far always been a disaster.

So I'm sorry, until the likes of Mr Brand can come up with a constructive alternative that will deliver a better life for everyone, I'm sticking with democracy and capitalism. Of course it's flawed. Of course some people do better from it than others - and some of them deserve to have the smug smiles wiped off their faces. But simply posturing on TV and using big words, attacking the status quo without offering any suggestion of how to improve things, does nothing for politics and nothing for the human condition. I'm afraid Russell Brand's revolution would simply make things worse.

In case you didn't catch it, here it is: