The history under our feet 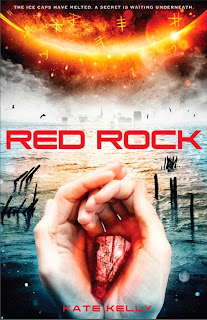 A new guest post by Kate Kelly. Kate is a marine scientist by day but by night she writes SF thrillers for kids. Her debut novel Red Rock, a Cli-Fi* thriller for teens, is published by Curious Fox. She lives in Dorset with her husband, two daughters and assorted pets and blogs at scribblingseaserpent.blogspot.co.uk

* No, I didn't know either. It stands for Climate Fiction, often dystopian fiction where climate change has had a significant impact on the environment.

Most of the time you will find me somewhere on the internet talking about writing with my fellow authors, but Brian’s invitation to appear as a guest on his blog has given me the opportunity to talk about my other great passion – geology!

During the day when I’m not writing fiction I work as a marine scientist. I studied first geology and then oceanography at university and both these subjects have remained very close to my heart – especially the geology. And I’m lucky because I am able to indulge this passion – I live on the Jurassic Coast (The southern one – there are two).

What I love so much about geology is the way it influences the landscape around us – it is like the skeleton underneath the fields, determining where the hills persist and the valleys form, the balance between rugged headland and sandy bay. I love the stories it tells of ancient swamps and shallow seas, vast forests and marauding reptiles. 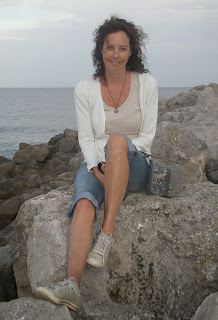 I stood in a quarry once, looking at a rockface - but that rockface was a section through time. I saw the ancient channels where a river once flowed, and the roots of the plants that had grown along its banks – cut off at ground level and singed to carbon by the overlying lava flow – an ancient cataclysm that had destroyed that peaceful valley.

I can stand on the beach near my home, sand ripples beneath my boots, and stare at ripples that look just the same, but are millions of years old, frozen into the rocks of the cliff face, reminding me that once before there was a sandy beach on this spot.

The Jurassic coast where I live is, in itself, a section through time. The rocks here span a period of time that straddles the Jurassic on either side.

We start with the Triassic red sandstone cliffs of East Devon, laid down in an ancient desert on the edge of an evaporating sea. We can see the ancient dunes in the cliff face, and find layers of gypsum left behind as what water there was evaporated in the sun.

As we head east the rocks change as the seas encroached, through the Triassic to the life rich seas of the Jurassic proper – ammonites and belemnites teemed in these waters as the occasional icthyosaurus swam by. 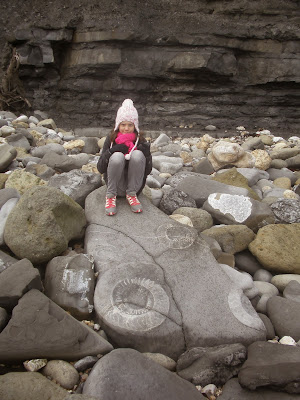 Then the seas shallowed to swamp and at Lulworth Cove you can stand on the remains of a fossil forest, giant tree ferns, their roots and stumps now turned to stone.

Finally the seas encroached once more – the eastern most layers are the chalks exposed at Old Harry Rocks – a deeper sea, these rocks made up of the carbonate shells of tiny plankton.

This is a section of coastline that can give you a broadbrush sweep through time – but if you start to look closer you can see the finer detail of that changing landscape – the local variations – where the land shifted along a fault line – did the Earth shake at that moment? I wonder if it frightened any dinosaurs?

Once there was a desert, then there was a swamp. Now there is a town. I wonder how much of that town will remain for geologists in the future?