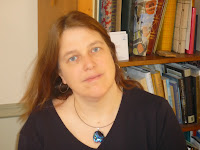 I'd like to introduce another of my guest bloggers: Ute (who pronounces her name Oooh-tah) Carbone is a multipublished author of women’s fiction, comedy, and romance. She lives with her husband in New Hampshire, where she spends her days walking, eating chocolate and dreaming up stories. Find out more about Ute and her work at her website.

Last summer, the great whites came to Cape Cod. There were multiple sightings of these sharks in the waters off the Cape Cod National Seashore. In July, a great white shark attacked a man kayaking near Nauset Beach in Orleans. A few weeks later, a swimmer was bitten near Balston Beach in Truro. These were the first recorded incidents of shark attack on the Cape in seventy five years.  Towns began to post warnings about getting into the water. On busy Labor Day Weekend, the bank holiday that marks the unofficial end of the summer season, beaches in Chatham and Orleans, a stretch that the Cape Cod Times  dubbed “shark alley”, were closed to swimming.  It was beginning to look like the opening to a sequel of Jaws.

I watched this unfolding story with great interest. I live in New England and have spent many a long weekend and holiday week enjoying the beaches on Cape Cod. I’m also a fiction writer and Provincetown, the fist at the end of Cape Cod’s arm, is the setting for my romantic comedy, The P-Town Queen.

The story revolves around the relationship between a down-on-her-luck shark researcher and a guy who’s hiding from the mob by pretending to be gay. You might think writing such a story involves little more than pulling it from
my overactive imagination and putting it to paper. But fiction, even at its wildest, has to have some basis in reality. If it doesn’t, the reader will soon put down the book (or throw it against the nearest wall, as the case may be) never to pick it up again. So even a fiction writer like me has to do her homework, otherwise known as research. Since my main character, Nikki, was a shark expert, one of the things I researched was great white sharks.

It takes a while for a book to go from bright idea to published entity. In the case of  The P-Town Queen, the process took  four years, give or take. And what I found in researching sharks off the waters of Cape Cod, four years before publication, was there weren’t many of them. An occasional sighting would cause a blip on the local news, but that was about it. If you were a shark researcher like Nikki, you’d most likely do research somewhere other than Cape Cod, choosing instead a location where there was a large population of sharks to study. The Channel Islands off the coast of California, perhaps. Or the southwestern coast of Australia.

I needed to set my story in Provincetown and so I made up a story line to fit this few-sharks-on-the-Cape fact. Nikki had been researching sharks in California, she lost her grant money and was forced to move home to Cape Cod to live with her retired fisherman father while she figured out how to get more funding and further her career. The story line worked. The book was picked up by Champagne Books and, in June of 2012, it was published.

And in July of 2012, one month after the release, white sharks started appearing off the coast of Cape Cod. There are good reasons for the increase in the white shark population.  Grey seals are a protected species and their numbers have been on the rise. Monomoy Island off of the town of Chatham  is now home to over a thousand grey seals. White sharks feed on seals, so the greater the food source, the more sharks come around to feed.  It does make perfect sense, but I can’t help feeling a little wiz-bang shiver at the co-incidence. I’m sure Nikki would be pleased that the subjects of her research have come to her. Funny, how things work, isn’t it?