Braindead at the Beeb 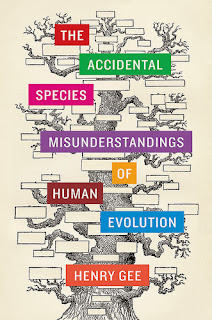 I'm delighted that my latest guest post is from the inestimable Henry Gee: Henry is a Senior Editor of Nature. His latest book ‘The Accidental Species: Misunderstandings of Human Evolution’, is now available from the proverbial All Good Bookshops. His blog The End Of The Pier Show continues to delight its three regular readers. DISCLAIMER: for readers for whom rhetorical devices are as giraffes to unicycles, no kittens were harmed in the making of this post.

Brian, for it is he, has invited me to write a guest post for his blog, so here I am, not too late I hope, with a bottle of wine and a smile, though I decided against buying the flowers on the garage forecourt as they looked rather tired. Goldie looks up from her cosy spot in the corner, raises an eyebrow and sensibly goes back to sleep.

I’ve known Brian for six years or so, ever since we both had blogs on Nature Network (now SciLogs). We’ve even met two or three times in real life. Just to show you that we take this science business seriously, we did, on one occasion, share a podium at the Royal Institution. Here we are, with author Clare Dudman:

We share interests in all sorts of things from writing and music to dogs and the zany antics of Boris Johnson. Another thing we share is a general despondency at the scientific illiteracy of people in general – especially among people who should know better.

Like those at Casa Clegg, we watch chez Gee a televisual emission called ‘Waterloo Road’, a soap opera of the doings at a comprehensive school in the north of England. Brian noticed, as did I, that on one occasion the science teacher wrote the formula for hydrogen peroxide on the board as H2O2, with the ‘2’s as superscripts rather than subscripts. Who let that howler through?

But wait, there was more. In another episode of ‘Waterloo Road’, Brian noticed that the chlorine molecule, Cl2, was described as C12 (C twelve) – someone had misread the ‘L
’ as a 1’. (I confess I didn’t see that episode. I was in my shed at the time, listening to my tapes of kittens being impaled on red-hot skewers.) Once again, didn’t anyone notice?

Such programmes are watched by quite a lot of people, notwithstanding inasmuch as which those of school age, and their teachers. They are indeed avidly lapped up by the younger Gees (13 and 15) and Mrs Gee (a learning support assistant.) So you’d hope that the people making the programme would take some care with its content. First, the people who write this stuff. Then there are the script editors, the producers, the editors, the directors. Did anyone notice? If not, why not? To anyone with more than a gnat’s crotchet of scientific literacy, these errors would stick out like a sore thumb.

I can think of three reasons why such errors were left until broadcast. First, the people responsible didn’t even have as much science as that. Second, they might have had that much science, but were plain incompetent. Third, they just didn’t care, because such things are, to them, small and unimportant details. Quite apart from the necessity in dramas, even those as ridiculous and over-the-top as ‘Waterloo Road’ (an establishment where fires, poisoning and brutal murder are not unknown), that details are important to maintain the suspension of disbelief, this betrays an insouciant ignorance that should not be tolerated.

Now, I’m not talking about the televisual ghetto in which science is usually confined, which, if its offerings are designed for a general audience, speak to us as if we are small children, in what Rabbi Lionel Blue once called the ‘let’s-all-be-bunnies’ voice. ‘Horizon’, the flagship science TV show on the BBC, is the worst offender. Its offerings are almost uniformly dreadful. Whenever reason fails me and I switch on, imagining’ hope against hope, that things couldn’t get any worse than the time before – they do.

The few episodes of ‘Horizon’ that treat us like adults are proofs in the breach. One thinks of Simon Singh’s wonderful film  for ‘Horizon’ on Andrew Wiles and the solution to Fermat’s Last Theorem. How could any TV program succeed that was about maths? When he suggested the subject to the BBC commissioners, Singh recalled at a lecture I attended, “you could see they’d have preferred a program called ‘Fermat’s Last Dinosaur’ or ‘Fermat’s Last Volcano’.” The fault, then, lies in a broadcasting culture in which science is seen as something for small children. If it is for older children, or – gasp – adults, it’s aimed at a self-selected audience of geeks, with a presenter who looks like the cool older brother you never had (Brian Cox) or an indulgent grandparent who might be persuaded to dispense a Werther’s Original (David Attenborough).

Science literacy is poor, and this is especially true of TV, in which the arts, politics and current affairs are usually presented to a high level.  What I contend here is that it’s so poor that it reflects an almost deliberate carelessness on the part of the people who churn it out. And that’s shocking.  If the commissioners of the BBC would (or so one would hope) never let through a humanities programme that treats its audience as if they were watching ‘Playschool’, why is science presented in such a jejune fashion?

Do broadcasters, seeing that many toddlers can pronounce words such as ‘Triceratops’ while still in diapers, assume that science is a form of children’s programming, something that might not be of interest to intelligent adults?

Is this why broadcasters, remembering that they once in childhood saw ‘Captain Pugwash’, pronounce ‘boson’ as ‘bosun’? If anyone does that to me, especially if it’s live TV, I shall mention Higgs the Bosun’s shipmates – Master Bates, Seamen Stains and Roger the Cabin Boy.