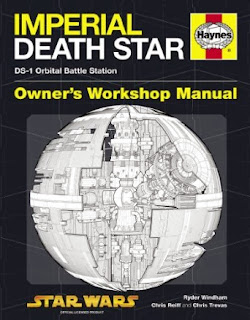 Anyone who has gone through that 'I want to fix up my car' phase in the UK will be familiar with Haynes workshop manuals. These large format hardback books take the reader through all the basic maintenance and fiddly bits for practically every model of car you can think of. Now, they've added a fairly unique bit of maintenance work to their portfolio - fixing up the Imperial Death Star from Star Wars.

This is one of a range of entertainment-based titles added to the range. I recently reviewed the UFO Investigations Manual, but the Death Star version is closer to originals in the sense of being about a specific piece of technology. Like the UFO book, though, it's a bit of misnomer, in the sense that it isn't actually a workshop manual - it doesn't guide you through maintenance work on a Death Star, but rather it is a book about the Death Star, treating it as if it really existed.

It reminds me in some ways of the sort of thing you used to see in comics like the Eagle when I was young, where you might have a feature on something like the latest steam engine (ahem) or jet fighter or bomber (I remember one on the ill-fated TSR-2) which would inevitably include a cutaway drawing - and here we get several of these on the Death Star in all its glory.

One of the handy things about the whole Star Wars universe, probably only paralleled by Star Trek, is the extent to which back story details have been built up that makes it possible to provide page after page on the technological precursors of the Death Star and the different sections of the vast spaceship (120 km across, in case you wondered). There are plenty of diagrams and also plenty of stills from the Star Wars movies, illustrating different parts of the interior, exterior, and the partly completed second attempt at a Death Star.

Being old and cynical, the faux history and commentaries from the Grand Moff Tarkin amongst others come across as a little forced, but I think for a younger reader these won't prove a problem, and I think any younger fans of the original (and best) Star Wars movies, plus any older types with a sentimental fondness for these films will get a lot of enjoyment out of this. Certainly an excellent stocking filler if you have a big stocking.

You can see more at Amazon.co.uk and Amazon.com.
Using these links earns us commission at no cost to you