Dipping a toe in the fiction world 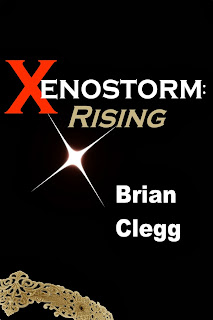 I have long had this suspicion that somehow you aren't a real writer unless you've written some fiction. Clearly this is ridiculous - and yet it's a beguiling feeling.

The first ever book I wrote was a novel (a thankfully now lost turgid science fiction epic, written on the train on the way to school), and I have written at least half a dozen more, which haven't seen the light of day, but I would say are part of my learning to be a writer.

Now, though, I am glad to say, I have a real work of fiction that makes me proud and is published. (I should say I'm already proud of some published short fiction, like my short story in Nature.) It's called Xenostorm: Rising and it's aimed at the young adult market, which is theoretically 11 to 14ish, but in practice is popular with adults too - think Harry Potter in this respect.

This is science fiction, but not in an intrusive spaceships and ray guns way - it is SF that happens to apparently ordinary teenagers with extraordinary results that could transform the world in a shocking way.

The book is available as paperback and ebook from its website, where you will also find details of the Xenostorm game, a fun online puzzle game. At risk of sounding corny, the book should be a great stocking filler for young adult readers.

To give you a taster, here's the opening chapter:


DAVY FORCED a path through the streams of pedestrians flooding down London’s Cromwell Road.

Across the wide street loomed the Natural History Museum, a Victorian forest of pillars and carved beasts thronging around its twin towers. Already visible ahead was the tall town house with his flat on the third floor. Davy’s home – at least for the next few months.

He stopped to unwrap a stick of gum and stared at the plain white house.

When, he thought, had they ever lived anywhere longer than a year?

Now Davy was in London. Before that Kent, then France and South America. It sounded exciting. But it wasn’t so great when you lived it. Davy had never belonged anywhere. His parents said that their jobs were to blame, but that seemed an excuse. There were plenty of journalists and scientists who didn’t drag their children from place to place. It was almost as if they were frightened of settling down.

Why couldn’t they have stayed on the farm? That was really home.

Davy’s first seven years had been spent on an isolated farmstead, up on the high Pennine moors of Northern England. A cold, wild, wet place – yet one that always felt solid and reliable.

That was how it should be, he thought. Seven years without moving on. There was a dog, Jasper, and everything. It was normal, comfortable. They were a proper family then.

He threw his gum wrapper at a bin by the road’s edge. It fell short, dropping to the pavement.

No one would notice. London was like that. You could be invisible. If only it was the same at school.

For Davy, walking through the school gates with their twisted crowns of barbed wire was a daily ordeal. He knew that somewhere the bullies would be waiting. It was only if he managed to find his best friend Raul first that he would be safe. Then they would leave him alone.

It’d be hopeless without Raul, he thought. There’d be no way to make it through the day. But everyone liked Raul – even the bullies.

Just ahead of Davy a girl collecting for charity stood in the middle of the pavement, chatting to an elderly man. He saw her at the last moment and swerved to avoid a collision. When he looked back over his shoulder, she winked at him, a pretty girl with long black hair. Davy felt a warm flush of embarrassment and looked away at the pavement ahead.

If mum knew about the bullying she’d say ‘Just tell a teacher,’ but it didn’t happen to her. She didn’t know what it was like.

Davy’s mother was the solid one of the family. The person he and his father turned to when things went wrong. A physicist, she wasn’t anything like the stereotype mad scientist. She was good with people, always making friends quickly. But she wasn’t right about everything. She thought anyone could be reasoned with, even a bully.

Why was he a target? It’s not like he was a nerd. He fitted in. Not fat. Average height, almost. Alright, there was his hair, you always got snide remarks about red hair, but not like this.

He glared at the passers-by, daring them to laugh, but they ignored him.

His iPod reached the end of the track. He slipped it out to skip the next song, that rubbish one with the boring chorus.

He touched the control.

What’s happening? Stop it! Please, someone stop it!

A wave of pure agony blasted through Davy’s skull. It was like a dentist’s drill ripping into his brain. Pressure soared in his head. Jagged bursts of excruciating pain tore down his neck. More and more the pressure built behind his eyes, so much they would surely burst.

Clutching his forehead, Davy dropped to the pavement.