It's relatively rare that physicists indulge in a spot of whimsy. They are, on the whole, rather literal people - which is not to say unimaginative. Most modern physics is so imaginative it is hard to believe it is connected to the real world. But it is rarely whimsical. However, one rare step into the field, far eclipsing Schrödinger's unfortunate mangy moggy, is the strange case of Maxwell's demon, and this imaginary character's threat to the second law of thermodynamics. This is the third and final post on the subject, inspired by my book Dice World. 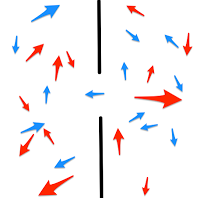 Let's start with the split box we met in the previous post. The door in the middle has been open for  a while and entropy has risen as the gasses on either side go from being hot and cold respectively to a mix of the two. But now enter the demon. He is an extremely small creature, so small that he can see the individual molecules of gas passing back and forth in the box. And he has such a high metabolism that he can respond to the different molecules one by one as they pass by. He is in charge of a trap door in the divider that splits the box in half, a special trap door that it takes no energy to open and close. As a molecule approaches the (closed) door our demon takes a look at it. If the molecule is moving left to right and it’s fast, he opens the trap door and lets it through. If it’s going slow he leaves the trap door shut. Similarly, if a molecule is moving right to left and it’s slow, he opens the trap door. Fast molecules from right to left don’t get through.

After a while, our demon will have many more fast molecules in the right-hand half of the box than in the left-hand half. He will have started with a mixed gas with a middling temperature throughout the box and will have ended up with cold gas in the left section and hot gas in the right. He has reduced the entropy, because the gas molecules are now more ordered than they were before, the reverse of the original action of opening the partition and letting them mix. But assuming he really can open and close the trap door with no energy used, then he really is a demon. He has defeated the second law of thermodynamics. Not through some statistical fluke, but systematically and reliably.

Ever since the demon's introduction by the great James Clark Maxwell (though it was Lord Kelvin who called the creature a demon), there has been a debate about what's wrong with this model of the world. It surely can't be allowed. The chances are that it comes down to a failure in the simplification that always occurs when we build a scientific model of reality. Sometimes that simplification is very obvious. I recently saw a paper addressing the likelihood of getting a cat into a superposed state and it began by assuming the cat was a sphere of water. Can you spot the simplification?

With Maxwell's demon we have a few potential issues. One is whether we can have a door that can be opened and closed without putting energy into the system, which may be enough to account for the very small increment in entropy every time a molecule is switched by the demon. Another is that the demon would have to make a measurement of the incoming molecules to decide if they were fast or slow. That act would surely involve some exertion of energy? Again, very little is required to balance out the increase in entropy of a single molecule's position. But cunning scientists have found ways around these issues.

There is a more mind-boggling suggestion. Apparently, while storing information does not require energy, erasing information does. And it is suggested that with each measurement the demon has to adjust its ideas of what 'fast' and 'slow' are, which means that each molecule that passes by will add to the demon's memory store. Arguably, however much storage the demon has, to keep going with the process it will eventually have to delete information to make room for new stuff - and there goes the energy.

If you think that argument is tenuous, it is. The demon may well still be off the hook. But whatever the outcome, it still makes a fascinating way to think a little more about this most significant of physical laws.