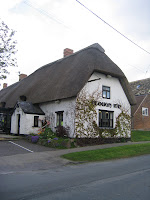 We are blessed to live in a village with six (count 'em) pubs, each excellent in its own way, though we personally favour the excellent Plough pictured here.

However, every time we go in, I can't help but wince. On one wall there's a small bookcase that advertises itself as part of the now defunct Book Swap programme, established by the BBC's Read and Write campaign.

The idea is simple. All the books are free to take away - but you are encouraged to bring one or more along to replace them. Books for nothing, as it almost says in the Dire Straits song, though I don't know about chicks for free.

On the face of it, this is a good thing, encouraging people to read more. But it could also be encouraging them not to buy books - forgive me if I'm less than enthusiastic about this concept. Most writers earn a pittance as it is. Anything that encourages people to share books freely somehow doesn't seem fair. I wouldn't get far encouraging people to share their cinema experience freely by videoing the movie and swapping it with friends. I know it's not quite the same, but...

In the end, intellectually, I think I'm just about in favour of the concept. Arguably if you get people in the habit of reading they will buy more books as well as swapping them. But it doesn't stop my gut reaction of horror every time I see that Book Swap sign.