The good, the possible and the ugly 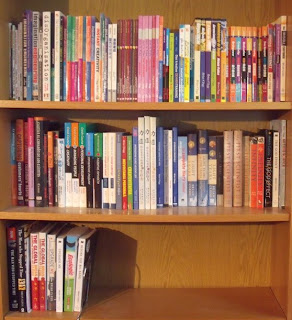 I find I have a strange relationship with the different books I've written over the years, a relationship, I'm afraid that is primarily driven by money.

When a book first comes out, and it's fresh and new, I love it and do my best to promote it how and where I can. But with the slightly older books, an invisible split opens up. Broadly there are three categories a book can end up in - 'in profit', 'on the way to profit' or 'will never make it.'

If a book's in profit, it's a no brainer. It has earned enough from royalties to pay off the publisher's advance. This means every copy sold puts some new pennies in my pocket. So I will do everything I can to keep such a book in the public eye (and to keep it in print, but that's a different story).

A book that's on the way to profit looks likely to get there in the next year or two. So it's well worth nurturing and trying to get more sales. But for some, the gap is too immense. While they go out with the usual possibility of becoming a bestseller, for some reason they don't make it, despite everyone's best efforts. After about a year it becomes clear that there's really no point flogging a dead horse. I still hope it stays out there - it might have a strange resurgance - but putting a huge effort into keeping it visible isn't worthwhile.

This may sound very mercenary, and it's certainly sad, because some of the books that don't do very well are, in my opinion, among the best - but with only a limited amount of time and effort available, it's essential to concentrate that effort where it will result in payback. It's logical and necessary - but it sometimes feels like abandoning your children.