March 08, 2010
A few hundred years ago, it was assumed that the process of burning something produced a substance called phlogiston. After all, the ashes of a piece of wood were lighter than the original substance, so clearly something was given off. Roll forward to Victorian times. By now, phlogiston was considered a rather silly idea. However, Victorian scientists did think there was something called the luminiferous ether.

Like phlogiston, this was a substance that was assumed to exist because it made it possible to explain a physical phenomenon, even though the substance itself had never been observed. The phenomenon in question was light. Young had shown conclusively that light was a wave. And a wave is a movement in a material. That's why you can no longer hear a ringing bell in a jar that you pump the air out of. There's nothing left in the jar to do the waving, so the sound disappears. But you can still see the bell. Light's waves seemed to be a wave in nothing and that wasn't possible.

The ether (or aether) was a mechanism to get round this. It was a material that filled all space, which light rippled through. But it was a very strange material. It was so diffuse that it had no effect on objects that passed through it - there was no equivalent of wind resistance. Yet at the same time it was incredibly rigid. It had to be because it was known that light travelled vast distances through it. When you send a wave through a material, the floppiness of the material gradually absorbs the energy of the wave and it disappears. But the ether seemed to let light go on for ever - so it had to be almost infinitely rigid.

Although there was strong support for the ether at the time, it was really quite a relief when the triple whammy of Maxwell, Michelson-Morley and Einstein doomed it to non-existence. Maxwell came up with a mechanism for light that didn't require a medium for it to move, Michelson and Morley demonstrated the ether could not be detected by experiments that should have shown it up, and Einstein came up with a way of thinking about light that made the whole idea of an ether silly. 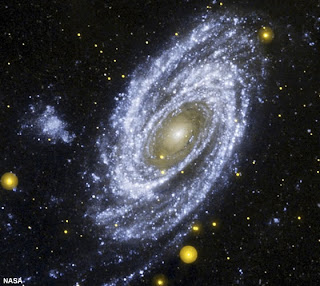 Roll forward to the present. The universe is too heavy. Specifically, when we look at other galaxies out in space, they are rotating too quickly for the amount of mass we estimate they contain. We need a whole chunk of extra mass that we can't detect in any way. So the concept of dark matter was born. Some kind of material with mass that is largely undetectable, to explain away the behaviour of galaxies and a few other cosmological oddities.

And we're not talking about a teensy bit of extra mass. The amount of dark matter that is required has many times more mass than all the conventional matter in the universe.

The defenders of dark matter say that the concept is quite different from the ether - but I'm really not sure. It is, once again, a hypothetical undetectable substance to explain away a phenomenon that doesn't seem to make sense.

Don't get me wrong. The fact that I don't like dark matter doesn't make it any less likely to exist. Science doesn't work by assuming something has to feel right for it to exist. (Just consider the existence of bankers' bonuses, if you make this assumption.) However it does mean that we should perhaps consider more seriously than we currently do alternatives to the existence of dark matter. All too often popular science books are written as if dark matter were a fact. It's not, it's a rather uncomfortable hypothesis.

There are alternatives to dark matter, the strongest of which is probably MOND, MOdified Newtonian Dynamics. This essentially says that the gravitational effects of mass are slightly different on the scale of a galaxy. We tend to assume that physics applies in exactly the same way everywhere. But we already know that the physics of the very small scale - quantum physics - produces effects that are very different from the scale of the ordinary world. It's not stretching things too far to think that there may be some variation on the scale of a galaxy.

We may be coming to a point where this can be tested. An experiment has been devised for the first time that might show the impact of MOND in the laboratory. It's early days, but I, for one, would be delighted if we can do away with dark matter. It's currently the mad aunt in the attic of cosmology - and I'd rather that mad aunt were fictional.
cosmology physics theories