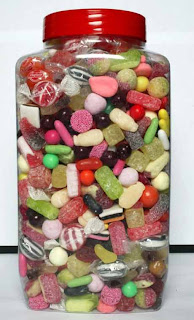 There's a popular game at fetes where you have to guess how many sweets there are in a jar. Making an estimate like this can be an enjoyable intellectual exercise. In a similar, but more complex, vein, the Cambridge entrance exams and the general exam sat by science students there used to feature fun little challenges. Two still stick in my head. One was A violin plays the A above middle C. Estimate the tension in the string. And the other: Estimate the distance from the North Pole to the Equator around a great circle.

Under exam conditions you just had to use your brain to achieve a result - challenging but fun. (Incidentally, although most people fiddled around with geometric calculations, the second one has a very quick way of coming to a surprisingly accurate answer. Solution at the bottom of the post.)

Now there's a blog dedicated to this kind of mental exercise - and it has a competition at the moment too. Run by Aaron Santos, the blog, A Diary of Numbers features challenges to work out everything from how much he would have reduce the size of the Earth to bring a day down to a second, to how many mirrors it would take to melt an aircraft carrier in a second (rather unnecessarily quick, I would have thought).

These types of calculation are often known as Fermi problems after Italian-American physicist Enrico Fermi, who was famous for his ability to make top-of-the-head estimates that turned out to be surprisingly close to reality. Really, though, they ought to be called Archimedes problems. This isn't just because that idea of melting an aircraft carrier is inspired by Archimedes' plan to use curved mirrors to focus sunlight to set Roman ships on fire. It's also because Archimedes wrote a whole book that addressed such a problem over 2,000 years ago - giving him something of a precedent over Fermi.

The book was called The Sand Reckoner, and in it Archimedes set out to work out the number of grains of sand it would take to fill the universe. I ought to say that by universe, he had in mind something around the size of the solar system - but still it was pretty big. Intriguingly, he worked out values for two universes - the conventional one with the Earth at the centre, and one based on a weird idea from someone called Aristarchus that had the Earth going around the Sun. This is the only reference we now have to this early heliocentric idea.

Archimedes wasn't just having fun, though. He wanted to show you could extend the number system as far as you needed - something rather essential, as at the time the biggest number was a myriad - 10,000. The result is a tour-de-force of Fermi thinking. You can find out more about it in my book A Brief History of Infinity.

Meanwhile, back at A Diary of Numbers, the competition is to win a copy of Aaron's book How Many Licks, and what you have to do is come up with the best estimate for the number of times Mario has been killed in the various computer games he features in. Go to the competition page to see more details and enter.

The trick to working out that distance is knowing how metric distances were first defined. A kilometre was defined as 1/10,000th of the distance from the North Pole to the Equator through Paris. So an immediate and pretty accurate estimate is 10,000 kilometres.
big numbers estimating guessing irrational numbers