Just because entanglement is 'spooky' doesn't make it mystical

March 25, 2010
If your write about evolution or cladistics, (applying a system/structure to species) like my friend Henry Gee your work inevitably get picked up by creationists and intelligent design merchants. In an attempt to prove that everything was created 6,000 years ago, and that dinosaurs were wiped out in Noah's flood or put there to fool us by a (presumably) malicious God, they take little snippets from the words that someone like Henry writes and use them as justification for something that can't in any way be deduced from those words. 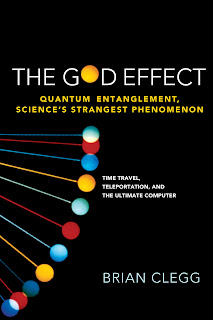 I don't know if I'm pleased or saddened to have joined the 'misquoted' brigade, though in my case it's on the fascinating physics of quantum entanglement. This is the subject of one of my best selling books, The God Effect. Einstein first wrote about entanglement in 1935 in an attempt to disprove quantum theory (he failed), and called it 'spooky action at a distance.' It is quite remarkable. When two quantum particles are entangled, you can separate them to opposite sides of the universe and a change in one of them will instantly be reflected in the other. Although you can't, as first appears, use this to communicate faster than light, it does make also sorts of interesting things possible from quantum computers to quantum teleporation - a Star Trek transporter on the scale of an individual particle.

However, this is all good solid physics - no woo required. So I was rather bemused when it was pointed out to me that a website talking about 'healing the body with energy' and 'empaths' was using me as a reference. Here's what it says:

I have so so many physical sensations that I had desperately sought for solutions. Also have you heard about the long experiment by Brian Clegg that demonstrated the use of the law of entanglement with empathic and telepathic individuals? I will be bringing up those foot notes of his soon.

Wow. I look forward to reading about my experiments, because it's the first I've heard about them. What I do say in The God Effect is that Nobel Prize winning physicist Brian Josephson, on the text to accompany some stamps portraying the Nobel Prizes a while ago, said that if telepathy exists, then entanglement would probably be the mechanism behind it. When I spoke to Josephson about this, he admitted it was in part just to be provocative, though he has an open mind. But let's be clear about this. There is no good scientific evidence to date that telepathy does exist. If it did exist, then a likely mechanism would involve entanglement - but if that was the case, it wouldn't show that entanglement is somehow all mystical, it would show that telepathy is just another straightforward, physically explainable phenomenon.