Make Your Own Mystery 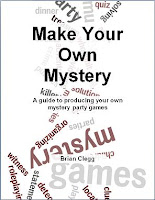 For a while now I've run a website www.organizingamurder.com which lists a whole host of downloads and boxed kits to use at murder mystery parties and other mystery events. However it's a limited field. Most kits are for a specific number of players, and there are relatively few themes that everyone who makes these things seems to revisit.

To try to increase the flexibility, I've added a new ebook Make Your Own Mystery, the idea being that rather than buy an off-the-shelf mystery, you get instructions on how to put a new one together yourself. It covers both traditional role play party games - the sort where each guest plays the part of a character in the mystery - and the more flexible type of games, from treasure hunts to murders, that I provide in the Organizing a Murder ebook - games that can be played by any number of people and don't require the role play aspect.

I'm sure this won't be for everyone. The thought of coming up with your own mystery can be quite challenging (though some of the styles are very easy to put together). But I hope that it will help those who fancy having a go but don't quite know where to start.

If you know of any mystery party games I don't list on the website (or mystery party organizers that aren't on my list), do let me know at info@cul.co.uk and I'll add them.
games murder mystery parties