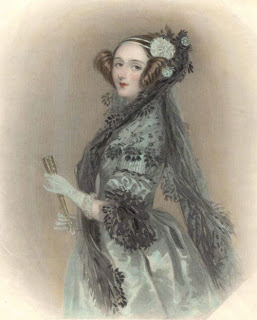 Today, it seems, is Ada Lovelace day, an international day of blogging about the achievements of women in science. Although she is not my subject, I ought to say a little bit about Ada, since the day is (somewhat inaccurately) named for her. She was born Ada Byron, daughter of the romantic poet and was a long term friend of, and enthusiast for the work of, Charles Babbage, the computing pioneer. Although there was some talk about a match between Ada and Babbage, she was married off to William King who became Earl of Lovelace in 1838, so strictly Ada is Ada King, not Ada Lovelace - in full she was Augusta Ada King, Countess of Lovelace.

Ada is often described as the first programmer. This is a slight exaggeration, in part because the 'computer' she 'programmed' never existed. What she in fact did was translate a paper on Babbage's work by Luigi Federico Menabrea from the French, and added a series of notes of her own - notes so detailed they ended up longer than the paper they accompanied. In her notes she showed a deep understanding of the importance of Babbage's conceptual Analytical Engine and the means by which it could be used. She wanted to do more, offering to help Babbage with his work, but he turned her down. 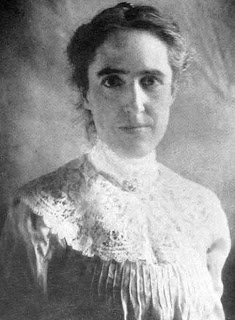 However it isn't Ada I wanted to mention today but Henrietta Swan Leavitt, a major player in astronomy at the end of the nineteenth century. Born in Lancaster, Massachusetts in 1868, like a number of other women, she was first involved in science as a computer. This was not a device back then, as we now take 'computer' to mean, but a person who made measurements and calculations from photographic plates.

Despite ill health, she rose to become the head of stellar photometry at the prestigious Harvard College Observatory. Here she did not limit herself to simply recording observations but painstakingly built up a theory that would be central to our understanding of the size of the universe. Her subject was Cepheid variables.

These are variable stars which, as the name suggests, fluctuate in brightness, pulsing in a regular fashion from darker to lighter in a period that can last anything from hours to a year or more. Cepheid variables are named after the constellation Cepheus. Anglo-Dutch amateur astronomer John Goodricke discovered the first true variable star, Delta Cephei (hence the name Cepheid) in 1784, just two years before his death. He had already observed another star with varying intensity, Algol (Beta Persei), but this, as he suggested, varies because it is a pair of stars orbiting each other, one dark, not due to direct variation of the star itself. From observation of a good number of Cepheid variables that we can get a parallax distance on, it seems very likely that the speed of flashing of these variable stars is directly linked to their brightness.

Henrietta Leavitt was directly responsible for the theory that linked the speed of variation of the Cepheids with their brightness. This meant they could be used as 'standard candles'. If you saw a Cepheid variable, its flashing rate would tell you how bright it actually was - compare this with the apparent brightness and you could estimate just how far away the star was. Miss Leavitt's stars were a yardstick for measuring the universe. The work was completed shortly before Henrietta Leavitt's death at the age of 53 in 1921.

You can find out a little more about Henrietta Leavitt (biographical details are sketchy) and a lot more about her work in the book Miss Leavitt's Stars by George Johnson.

And you can see what's happening with the Ada Lovelace Day posts here.
history of science women in science