The Lives and Times of the Great Composers 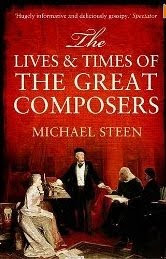 A little while ago I wrote about the book The Rest is Noise, after a recommendation to lay my hands on a copy to find out more about twentieth century music.

In response to this, Icon Books kindly provided me with a copy of The Lives and Times of the Great Composers by Michael Steen. They describe it as magisterial - and this is certainly true if it means bulky - there are almost 1,000 pages in this chunky concoction. The book has chapters on most of the big names from Handel to Puccini, so roughly 1700 to the early 1900s. There are also some rather summary compound chapters taking in, for instance, the big twentieth century Russians (I think it's bizarre that as trivial a composer as Puccini has his own chapter where Stravinsky doesn't, but the author does seem to have a particular favouritism towards operatic composers).

The main chapters are full of rich historical detail - fascinating if you like this kind of context. It hadn't really occured to me until reading this book, but history of music is very like history of science, in that to get it just right the author has to achieve a balance between historical context and details of the discipline (music and science respectively). Get too little of either and it's a fail.

Here you certainly can't criticize the historical context. There's masses of it. Rather too much for my liking sometimes. You can get three or four pages where the composer himself (I think they are all men) isn't mentioned, it's just about what the local royalty or political faction or doing. This got a little wearing occasionally. We also get plenty of the domestic details of the composers' lives, which is excellent. By contrast, the music is given rather skimpy treatment. There is very little on what made these composers great, which seems odd - like writing a book about Newton but not saying much about his theories on gravity or light.

A good example of this is in the chapter on Mahler. We hear a little bit about the Second Symphony, then the next one we hear about is the Eighth. Nothing about the remarkable structure of the Third Symphony, or the effectiveness of the Fifth, arguably his most approachable... or for that matter the famous 'hammer blows' in the Sixth. Although very occasionally we get a mention that, for instance Beethoven changed the rules, we really don't get a feeling what where the significant differences between his music and Mozart's. All in all, the musical side is a disappointment.

Overall, then, a good read if you like plenty of history, and an effective introduction to the private lives of these composers, but not something to give any appreciation of why their music is great.
biographies classical music music